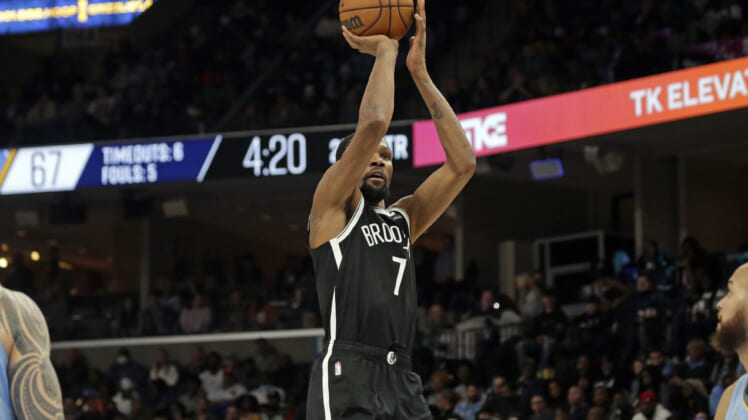 So far, the Kevin Durant trade discussion has focused on a few specific teams. Namely, the Boston Celtics, Miami Heat, and Toronto Raptors have been the organizations most often linked to the four-time NBA scoring champ. But that doesn’t mean a Durant deal will come down to those three.

Since Durant’s trade demand went public just over two weeks ago, a few other teams have gotten into the fray. As expected, both are playoff teams, who hope to take another step in their development this upcoming season.

According to Shams Charania of The Athletic, both the Atlanta Hawks and Memphis Grizzlies have expressed recent interest in adding Durant to their already talented young cores. Only, neither team has been able to meet Brooklyn’s current asking price for their superstar, with the Nets seeking two All-Star caliber talents.

The Denver Nuggets, Milwaukee Bucks, Philadelphia 76ers, and Washington Wizards have all also expressed interest in a Durant trade. Even the New Orleans Pelicans got involved, but those talks ended after Brandon Ingram was deemed to be off the table.

One extra fascinating tidbit from Charania’s latest report includes the specific trade offer the Atlanta Hawks made for Kevin Durant. Sometime in the past month, the Hawks presented a package featuring John Collins, De’Andre Hunter, and a draft pick in exchange for Durant.

Hearing both Hunter and Collins’ names tossed around won’t surprise anyone. It appears both are on the trade block, perhaps because they’re the two pieces the team feels are expendable while also being able to bring back a valuable contributor, if not two.

Yet it makes sense for the Hawks to try and dangle them for a true star such as Durant, but that doesn’t mean the Nets have to cave and take the first offer Atlanta sends their way. For their part, the Nets have clearly sent the message that Atlanta’s trade offer doesn’t move the needle toward getting a deal done.

One team who hasn’t been strongly linked to a potential Durant trade is the Memphis Grizzlies, but perhaps they should be viewed as a final contestant to land his services.

They have an up-and-coming roster and may be just one more piece away from being able to legitimately compete for an NBA Title. After winning 56 games last season led by Ja Morant and a deeply talented roster, they likely have the ability to part with some depth, especially if it could bring back a player like Durant.

As Charania notes, the Grizz have five first-round selections available to trade, in addition to a host of talent that can immediately contribute to wins. However, they don’t appear willing to include either Jaren Jackson Jr. or Desmond Bane, surely two players the Nets have their eye on in any Durant discussion with Memphis. The Grizzlies would rather prefer to build a package around their available draft compensation, but that won’t help the Nets win this season. And so we wait.