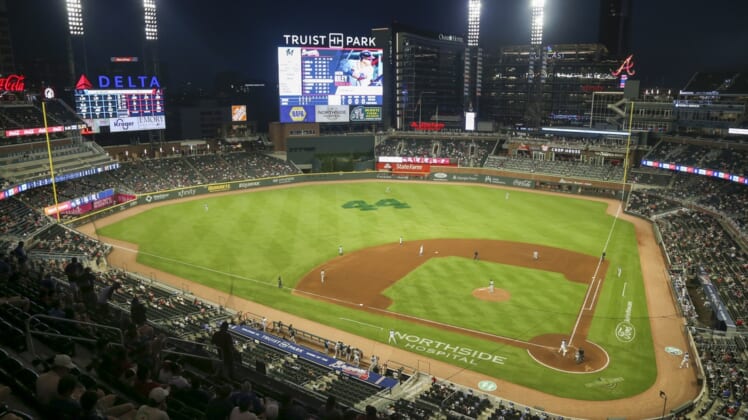 Apr 12, 2021; Atlanta, Georgia, USA; A general view of the number 44 on the outfield grass honoring the legacy of Atlanta Braves outfielder Hank Aaron (44) during a game against the Miami Marlins in the fourth inning at Truist Park. Mandatory Credit: Brett Davis-USA TODAY Sports

The Atlanta Braves announced Wednesday they will forgo capacity restrictions at Truist Park and will sell tickets for all seats beginning with their May 7 home game against the Philadelphia Phillies.

The Texas Rangers were the first professional team to go to full capacity, but they have struggled to sell all tickets to home games at their new retractable-roof ballpark, Globe Life Field. They sold 38,238 tickets to the season opener at their 40,300-seat stadium and have averaged 24,863 fans in 11 dates.

The Braves advanced to the National League Championship Series last season and fell one victory short from a spot in the World Series. But they were a disappointing 11-12 to start the 2021 season, going just 6-6 in home games.

The Toronto Blue Jays, meanwhile, were selling 1,950 tickets per home game for regular-season contests at their spring-training stadium in Dunedin, Fla. The Blue Jays are not playing in Toronto for the second consecutive season because of travel restrictions into Canada. They played home games at Buffalo last season.