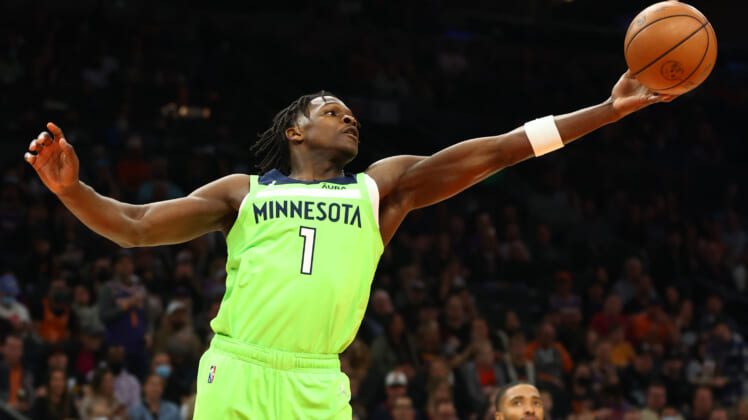 Coming off what some might say was a breakout performance, since as Anthony Edwards points out, the league never puts the Minnesota Timberwolves on national TV, he’s been making the rounds as news stations rush for a chance to interview NBA’s next biggest star.

One interview that generated some headlines and will surely spark some wild debates took place on ESPN during their NBA Today segment. It’s not uncommon for Edwards to provide a quote that’s pure gold for one reason or another, but this time he’s raising eyebrows. The young pup was asked how he feels his defensive growth has come along since entering the league as the No. 1 overall pick in 2020.

There was noticeable laughter once Edwards made the bold claim, and it’s notable that he was smiling while saying so, but that’s just the confidence he has. And it’s been that way from the start. A1 from Day 1.

Anthony Edwards is far from DPOY, but he is set to be a superstar

On a game-by-game, play-by-play basis, Edwards is far from a candidate to win Defensive Player of the Year. A young player, still just 20-years-old, Ant has far too many defensive lapses, momentarily losing sight of his opponent. Luckily, his incredible athleticism (in which T-Wolves play-by-play man Dave Benz likes to throw in colorful ant facts) allows Edwards to make up for his mistakes.

Alright, so Ant is a ways away from making up the ground needed to catch the 2021-22 NBA Defensive Player of the Year winner as Marcus Smart is a wunderkind on that end of the court.

Edwards has all the tools, smarts, and IQ to someday become a top defender, but he’s just not there yet. Which is ok, as the second-year pro has grown leaps and bounds since entering the league after just 32 games at Georgia.

Nationwide fans of the Wolves have witnessed Edwards’ enormous growth since his first NBA game, who’s to say the explosive athlete can’t continue making strides, especially with the help of Patrick Beverley, Jaden McDaniels and Jarred Vanderbilt proving to be great examples of how to play defense at a top-notch level.

Whether he becomes a top defender someday or not, Edwards has already become a star after averaging 21.3 points per game, helping the Wolves get to the playoffs for just the second time in 18 years. Edwards just missed becoming an All-Star this season after experiencing some knee issues causing him to miss time, but it’s safe to say his name can be written in permanent marker on the 2023 NBA All-Star team.