It’s safe to say, you can kill the Anthony Edwards trade rumors. If the Minnesota Timberwolves weren’t interested in trading the No. 1 pick before the draft happened, they sure as hell aren’t going to trade Ant once he’s already established himself as one of the rising superstars in the NBA.

This is why the latest brief mention of a Simmons-Edwards swap from Bleacher Report is asinine in the wildest ways. Sure, the Timberwolves have been connected to Ben Simmons all along. He’s pals with both Karl-Anthony Towns and D’Angelo Russell, but they have never indicated a willingness to part with their stars in pursuit of Simmons. That won’t change now that they’re experiencing more success with their core.

Still, in an article breaking down the best fits for a potential Simmons trade ahead of the Feb. 10 NBA trade deadline, BR couldn’t help but mention “If the Timberwolves were willing to move Anthony Edwards, along with filler contracts, the Sixers would probably jump at the prospect.”

Gee, you think so? That’s as obvious a statement as ever. In reality, the Sixers would leap at any possibility of landing Ant. The problem is, it ain’t happening. As even the article states, Edwards is one of the NBA’s brightest young players, and as they mention, is untouchable.

I don’t knock their analysis, it is a good article, but even mentioning Ant-Man’s name in a Simmons trade is incredibly unrealistic. 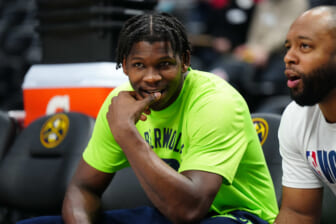 In fact, it might take Ben Simmons plus assets to acquire Edwards. But more importantly, it doesn’t take a genius to realize Edwards simply isn’t on the table. It doesn’t matter how desperate these big market teams get.

Unless the Wolves fell flat on their face over the second half of the season, you won’t see any of their big three traded away in the offseason. This is a team that’s bonded together and truly enjoys each other’s company. This isn’t the Tom Thibodeau-Jimmy Butler Wolves that go at each other’s throats. This team is building a culture behind head coach Chris Finch, or “Finchy” if you ask A1.

Basically, it’s time to accept that D-Lo, KAT, and Ant are all off the table in any trade negotiations. With the best starting five in basketball by net rating, why would the franchise change things up? They wouldn’t. 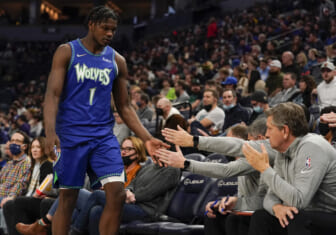