The Los Angeles Lakers are being very careful with the current Anthony Davis injury because the stress reaction he has could turn into a problem that keeps him off the court for as much as eight months.

While the 15-21 Lakers are performing well below expectations this season, Anthony Davis was off to a fantastic start and averaging some of the best points and rebound numbers of his career. After missing more than 40 games last season, the 29-year-old did all he could in the summer to get in the best shape of his NBA tenure and be a consistent force on the court all season.

However, his career-long battle with injuries reared its head again this month when Davis suffered a foot injury against the Denver Nuggets. A collision with reigning MVP Nikola Jokic led to what has been diagnosed as a stress reaction in the foot of the eight-time All-Star. Last week, the Lakers had several specialists review an MRI of the stress reaction and the opinions about were to do next were mixed.

One doctor suggested surgery to remove a bone spur the big man also has floating in his limb that’s causing him pain. Davis is hoping to avoid such a procedure, but he is also hoping to avoid rushing his recovery and suffering a setback that knocks him out for close to a year.

Anthony Davis injury could turn into a season-ending stress fracture

On Friday, Davis spoke to the media about his injury and revealed that he was “feeling a lot better, [and the] pain has subsided tremendously” after being listed as out indefinitely last week.

However, he also admitted the biggest fear about his current predicament. That is the possibility the reaction does not heal properly and becomes a massive problem for him and the Los Angles Lakers well into next year.

“I think the biggest thing is the stress reaction, though, just monitoring that. Because that can definitely lead to six, seven, eight months out — which I would rather take four weeks than seven months. I’m not saying I’ll be back in four weeks — but hopefully.” 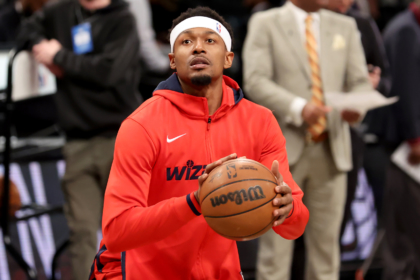 Anthony Davis has only played in 70 or more games twice in his career, during stints with the New Orleans Pelicans and Lakers. He has two more years and over $83 million left on his contract.