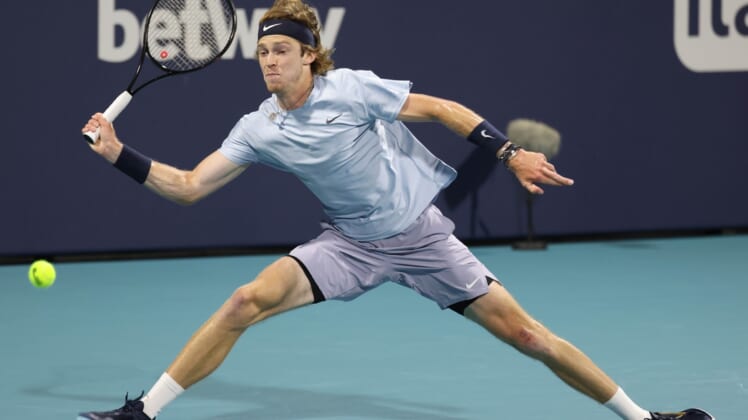 Rublev improved to 23-4 this season with the epic victory over the third-seeded Nadal.

“If we look at a player like Rafa, who is the best clay-court player in history, then of course it’s one of my best victories for sure,” Rublev said in a press conference. “But if you look at it from the other side, how he feels, for sure he didn’t play his even ‘good’ level today. In his position it’s so tough when people expect (that) you’re the best player on clay and you have to win every time. You cannot lose on clay because you’re the best. It’s so tough to play with this feeling.”

Rublev faces Casper Ruud in Saturday’s semifinals. The Norwegian advanced with a 6-4, 6-3 triumph over 15th-seeded Fabio Fognini of Italy.

Fourth-seeded Stefanos Tsitsipas of Greece will face Daniel Evans of Great Britain in the other semi. Tsitsipas won his first set 7-5 before Spain’s Alejandro Davidovich Fokina retired due to a thigh injury, while Evans rallied for a 5-7, 6-3, 6-4 win over Belgium’s David Goffin, the 11th seed.

Meanwhile, Nadal struggled with his serve against Rublev as he double-faulted seven times against one ace. He won just 41.7 percent of his second serves.

“For some reason I had problems with my serve,” Nadal said after a match that took two hours and 32 minutes. “I don’t understand why, because I was not having problems in the practices at all. But today was one of those days that my serve was a disaster.

“Serving like this, the serve creates an impact on the rest of the game. When you serve with no confidence, you are just focusing on trying to serve, not thinking about how you want to hit the ball. You just think about what you have to do with the serve to put the ball in.

“When you face great player like him and you don’t play well, you should lose. That’s easy to analyze.”

Rublev said Ruud will be a tough opponent even though he has won all three previous meetings.

“He is an amazing player, and every match against him was a dramatic match,” Rublev said. “We had really great rallies and a really great level of tennis. It is going to be super tough.”

Evans will be looking to slay Tsitsipas after beating top-seeded Serbian Novak Djokovic and Goffin on back-to-back days.

“I felt a bit more pressure today to not (just) win yesterday and give a bad performance today,” Evans said. “It wasn’t easy after the match yesterday, I felt really tired afterwards. To get back and focus, it was difficult. I am proud of how I came back today.”