Los Angeles Lakers center Andre Drummond signed with the Purple and Gold as a buyout player in the hopes of chasing a championship. Unfortunately, things didn’t go the Lake Show’s way, and Drummond is publicly venting about it.

Getting testy in the comments on Instagram is hardly the way to go about dealing with any issue. Someone must’ve forgotten to tell Drummond, as he proceeded to call out the Lakers’ coaching staff for not playing him more, per @dribblecity on Twitter:

If it’s any consolation to Drummond, Lakers head coach Frank Vogel was stuck with a lack of depth, a hobbled LeBron James and Anthony Davis dealing with injury issues once again. None of that boded well, and Vogel had to make frequent adjustments down the stretch.

Signing Drummond so late and integrating him into the rotation didn’t make matters easier, either, much less entering the starting five.

The 27-year-old had to be grateful to leave a dead-end Cleveland Cavaliers squad and have the chance to compete in the playoffs. In actuality, Drummond’s minutes didn’t diminish much from the 21 games he played for the Lakers during the regular season.

Drummond averaged 21 minutes in five postseason contests for LA, as the defending champions bowed out to the Phoenix Suns in six games. At least Phoenix proceeded to advance to the NBA Finals from there, so the Lakers don’t look so bad, especially given their injury setbacks. 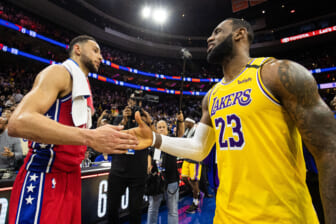 In any event, Drummond isn’t doing himself any favors by getting petty on social media.

There’s no denying this man is a phenomenal talent, with solid ball-handling skills for a center to go with elite rebounding ability and impressive athleticism.

It’ll be fascinating to see what Drummond’s demands will be salary-wise — and which teams are willing to accommodate him when he hits unrestricted free agency this summer.

Destinations that immediately come to mind for Drummond include the New York Knicks, Charlotte Hornets and Oklahoma City Thunder. 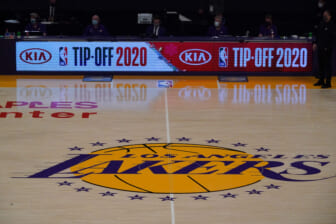 Knicks coach Tom Thibodeau would probably love a glass cleaner like Drummond to man the front lines of his elite defense, while the Charlotte Hornets should have the cap space to sign Drummond and give their frontcourt a big upgrade if they so desire.

Finally, if it’s money Drummond really covets, perhaps OKC will be the place for him to go. The Thunder are in the midst of a rebuild, yet with a big-time draft class, and Kemba Walker still to play as a huge trade chip, they might be able to turn things around more quickly than people realize.

Drummond probably won’t be proud of this controversy. The best thing he can do is put it behind him, seek out a fresh start and let go of his Lakers hatred to maximize the presumed prime years of his NBA career.