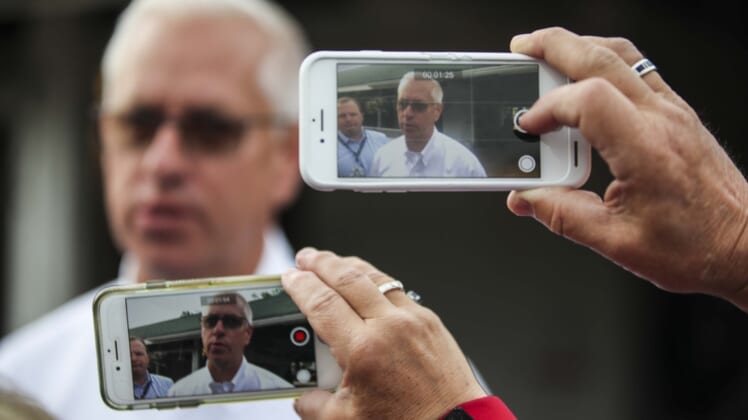 Trainer Todd Pletcher talks to the media about his Kentucky Derby horses, Spinoff and Cutting Humor, Wednesday morning after training. “Both horses give me the indication they’ll get the distance as well. From a training perspective, we’ve seen them do things in the morning that are consistent with the horses that we’ve brought here that have done very well. We like them both a lot. We’ll just see.” May 1, 20192019 Derby Week Backside

Also named to the class was 13-time champion steeplechase trainer Jack Fisher, who was chosen by the museum’s Steeplechase Review Committee, which meets every four years.

American Pharoah and Pletcher were elected in their first year of eligbility.

The class of 2021 will be enshrined along with the 2020 inductees — trainer Mark Casse, jockey Darrel McHargue, horses Tom Bowling and Wise Dan, along with Pillars of the Turf selections Alice Headley Chandler, J. Keene Daingerfield Jr. and George D. Widener Jr. — on Aug. 6 in Saratoga Springs, N.Y.

In 2015, American Pharoah — now age 9 — became the first Triple Crown winner in 37 years, and the 12th in history, when he swept the Kentucky Derby, Preakness Stakes and Belmont Stakes. A bay colt bred in Kentucky by owner Zayat Stables, American Pharoah won Eclipse Awards in 2015 as both Horse of the Year and champion 3-year-old male. He won nine times in 11 starts and earned more than $8.65 million during his racing career.

“He’s certainly among the all-time greats,” Baffert said. “I don’t think there is any question about that. He did everything so effortlessly and with such class. The way he moved, his mechanics were absolutely flawless. He also has such a wonderful personality. Pharoah is really a sweet and kind horse, and he loves humans.

“I went and saw him the other day (at Coolmore’s Ashford Stud) and he looks as good as he’s ever looked, if not better. Winning the Triple Crown with American Pharoah was the greatest sports moment of my life. It was so emotional and such a terrific thing for racing. He deserves all the accolades he gets.”

The 53-year-old Pletcher, a Dallas native, holds a record seven Eclipse Awards for champion trainer, and his horses have amassed a record $405.8 million in career earnings. He has won the Kentucky Derby twice (2010 with Super Saver, 2017 with Always Dreaming), the Belmont three times (2007, 2013, 2017) and has 11 wins in Breeders’ Cup races. He has won four Canadian Triple Crown races.

“I’m really humbled to be elected to the Hall of Fame. It’s an incredible honor and something that doesn’t happen without having great support around you,” said Pletcher, who was an assistant to Hall of Fame trainer D. Wayne Lukas from 1989-95. “…Training horses is all I ever wanted to do. I remember being 11 or 12 and telling my mom I wanted to train, and she said it was wonderful. From that point on with her endorsement I never thought of doing anything else.”

Fisher has trained for more than 30 years and has won 593 steeplechase races. His steeplechase runners have earned more than $17.8 million, second all-time to Hall of Famer Jonathan Sheppard.

“I’ve always loved being around horses. It’s been my life,” Fisher said. “I was terrible in school and didn’t want to be there. I loved riding and I love training. I learned a lot from my father (trainer John Fisher) and from guys like (Hall of Fame trainers) Mikey Smithwick and Tommy Voss. They were examples to me of the work it takes to be successful and also how they built a good team. You can’t do it alone.”