As the Dallas Cowboys face a pivotal offseason with key decisions looming on some of their biggest impact players, wide receiver Amari Cooper could reportedly be facing an uncertain future with the team.

The 27-year-old receiver is entering the midway point of a five-year, $100 million contract he signed with the Cowboys in 2020. He’s largely lived up to the deal and certainly exceeded the returns of the blockbuster 2018 trade that saw Dallas trade a first-round pick to the Raiders.

However, Cooper’s future in Dallas is uncertain. The organization had reservations about him before the 2021 season, with his injury history causing frustration. All of that came before Cooper, who is unvaccinated, missed two games after testing positive for COVID-19.

Set to be one of the highest-paid wide receivers in the NFL next season, it seems the Cowboys aren’t entirely sold on the Pro Bowl receiver coming back in 2022.

According to NFL Network’s Ian Rapoport, Cooper’s future in Dallas is “up in the air” with the organization wanting to re-sign Michael Gallup.

There is an element of risk here for Dallas. Gallup tore his ACL on Jan. 2 and didn’t undergo surgery until weeks later. While there is optimism that he’ll be ready early in the 2022 season, there are no guarantees he is as explosive in the first season back.

Entering the offseason, though, Dallas needs cap space and trading Cooper would free up significant relief in addition to netting a Day 2 pick. If Gallup is healthy, he’s a legitimate No. 2 receiver and would come at a cheaper cost than keeping Cooper.

While the Cowboys could also create cap relief by moving on from Ezekiel Elliott, the star running back will be in Dallas next season. 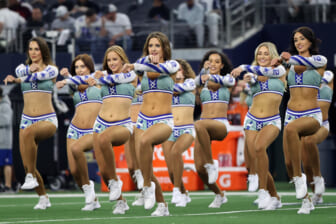