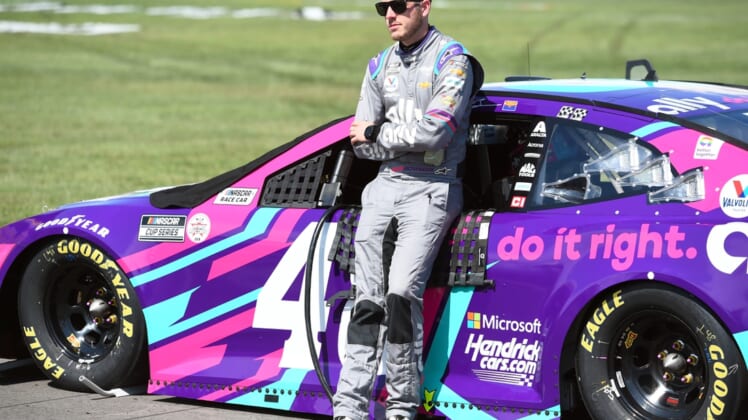 Larson had tracked Bowman down over the final 19 laps and then taken the lead from Hendrick Motorsports teammate Bowman with four laps to go.

Once out front, Larson put some comfortable space between himself and Bowman and was just over a turn away when the tire blew.

Bowman streaked past as Larson’s car bounced along the outside wall and went on to win was his third of the season.

It was Bowman’s first victory in 11 starts at Pocono and just his second top-five. It comes just days after he signed a two-year contract extension with Hendrick.

Rounding out the top five were Denny Hamlin of the Gibbs team and Ryan Blaney of Team Penske.

Larson skidded to a ninth-place finish.

Larson also won the non-points All-Star Race during his streak.

Defending Series champion Chase Elliott’s very bad week continued when his car was rammed from behind by James Buescher as the cars went to power after taking the green flag to start the race. The hit flared the left rear fender outward creating a “parachute” effect.

But Elliott’s Hendrick Motorsports team pounded away at the damage on ensuing pits stops and Elliott rallied to finish 12th.

Last Sunday in Nashville, Elliott was disqualified from the race when his car was found to have five loose lugnuts during post-race inspection.

The Cup cars will be back on the 2.5-mile triangular Pocono track on Sunday to complete their doubleheader weekend.