After falling a couple of spots in recent years, iconic Alabama Crimson Tide headman Nick Saban is once again the highest-paid coach in college football.

On Tuesday, ESPN reported that the university’s board of trustees approved an extension on Saban’s already existing contract with the school. The amendment to the deal now makes his contract run for eight years through February 2030 when he will be 78 years old.

However, in the race to be the NCAA Division-I football coach cashing the biggest checks, Saban reclaimed the top spot. His revised contract will now pay the 70-year-old $11.7 million annually — a $2 million increase on his previous annual salary of $9.7 million. The total contract is now worth $93.6 million.

The new deal is also $500,000 more than Georgia Bulldogs head coach Kirby Smart — the previous top paid coach — and the $11.2 million he makes each year for the defending national champions.

Nick Saban gets an extra $800,000 the next time he leads Alabama to a national championship

Saban is coming off of the program winning their 10th SEC title in 2021, and another trip to the national championship game. Unfortunately for Alabama Crimson Tide fans, the team came up short in the title game to Smart and Georgia. 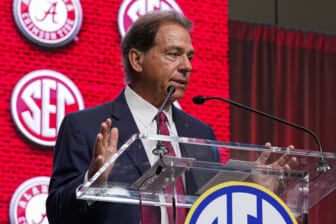