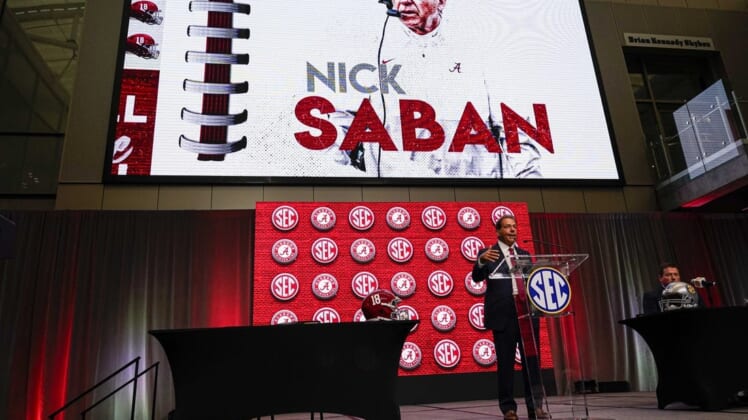 Alabama players made more than $3 million in name, image and likeness earnings in 2021, but Crimson Tide head coach Nick Saban wants more uniform rules to even the playing field.

The Crimson Tide, led by Heisman Trophy winner Bryce Young, remain at the center of arguments for stronger policing of the NIL policy that began one year ago and has been a flashpoint for debate in the SEC.

“I’m all for the players doing as well as they can and using their name, image and likeness to create value,” Saban said Tuesday at SEC Media Days in Atlanta. “We have a great brand at Alabama so players (are) going to be enhanced because of the value that our brand can help them create. … (NIL) is not an issue for us at Alabama.”

Dominant by most measures since Saban took over, Alabama might have an edge over many programs during the NIL era. That, and not what Texas A&M or Ole Miss might be up to in recruiting, is Saban’s biggest offseason concern.

“There’s got to be some uniformity and protocol of how name, image and likeness is implemented. I think there’s probably a couple of factors that are important in that,” Saban said. “How does this impact competitive balance in college athletics? Is there transparency to maintain fairness across the board in terms of college athletics? … How does this impact recruiting? On the recruiting trail right now, there’s a lot of people using this as inducements to go to their schools by making promises.”

Per reports, Young has agreements valued at more than $1 million for 2022 and the reigning Heisman winner could continue to prosper with the Crimson Tide expected to be near the front of the college football pack again this season. Alabama won 13 games in 2021 but finished as runner-up to Georgia in the national title game.

Young passed for 4,872 yards, 47 touchdowns and seven interceptions last season to claim the Heisman. He’s the latest in a run of Alabama quarterbacks who’ve produced at the top tier in college football for a program once known for its strangling defense.

“Early on, we’ve learned it was hard to win on defense in college football. If you have a dominant defensive team that couldn’t score points against the really good teams — that could be a problem,” Saban said. “We made the change to be a wide-open offense. We were able to attract quarterbacks of a caliber that really has helped us become one of the best offensive teams in the country. … I’m really proud of the fact that our last three quarterbacks are starters in the NFL, and the one we have now won the Heisman Trophy.”