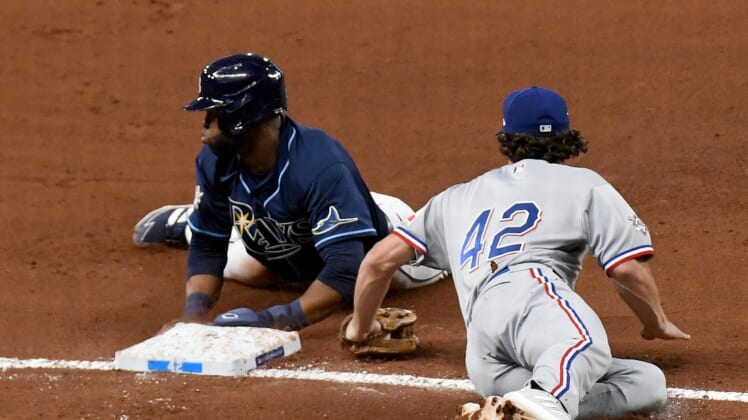 Adolis Garcia hit his first major league homer in the 10th inning, lifting the Texas Rangers to a 6-4 win Thursday night over the Tampa Bay Rays in St. Petersburg, Fla.

The Rangers took their fourth lead of the night when Garcia rocketed a two-run, opposite-field homer to right. The shot off Cody Reed (0-1), the Rays’ sixth pitcher, also scored Jose Trevino, who was placed on second with the extra-innings rule.

Josh Sborz (1-0) posted his first career win with a scoreless ninth inning, and Ian Kennedy collected his third save with a perfect 10th inning.

Nick Solak was 3-for-5 with a homer, two runs and two RBIs, Charlie Culberson went deep and Isiah Kiner-Falefa notched two hits for Texas, which won three of four games in the series.

Tampa Bay’s Mike Brosseau hit a two-run homer and a double. Francisco Mejia notched two hits for the Rays, who fell to 0-3 in extra innings this season.

With two outs in the second, Solak jumped on a 91 mph four-seam fastball from Hill and sent a deep drive to center field that went out for a 1-0 lead.

In Tampa Bay’s three-hit third, Meadows evened the game at 1 by ripping the first pitch he saw from Lyles for a one-out single to right, driving home Brosseau.

Culberson recorded his sixth hit in three games when he launched Hill’s 0-2 slider out to left for his second homer of the series — scoring Solak to make it 3-1 in the fourth.

Brosseau matched the blast in the bottom half, uncorking his first long ball on a center-cut 0-2 fastball to plate Margot, tying the score at 3.

In the fifth, Hill’s one-out walk to Joey Gallo eventually led to a run. Solak singled off Andrew Kittredge to collect his fifth RBI in the series for a 4-3 Texas lead.

In the seventh, catcher Trevino’s throwing error to second sent Brett Phillips to third, and center fielder Leody Taveras’ long toss to third hit the runner’s helmet — bouncing away and allowing Phillips to score on the second error.