The Philadelphia 76ers planned to be without All-Star center Joel Embiid for Monday’s game against the New York Knicks to rest his knee on the first game of a back-to-back. Now, the 76ers must prepare for life without Embiid for multiple games.

Thybulle and Joe landed in the protocols this past week, officially being quarantined on Nov. 5. Harris, who reportedly tested positive for COVID-10 on Nov. 1, remains sidelined and is experiencing some symptoms. As Charania notes, under NBA rules, Embiid will miss at least 10 days if he doesn’t return negative COVID-19 test results 24 hours apart.

Embiid’s absence delivers a significant blow to the 76ers. Despite multiple injuries and the Ben Simmons drama, Philadelphia entered Monday night with the second-best record in the NBA (8-2). They now enter a difficult stretch in their schedule (vs. New York Knicks, vs. Milwaukee Bucks, vs. Toronto Raptors), without one of the best players in the NBA. 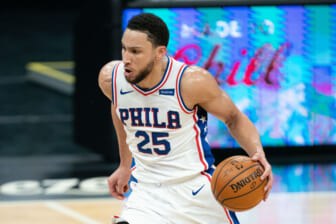 With Embiid sidelined indefinitely, Andre Drummond steps into the 76ers’ starting lineup. Coming off the bench this season in Philadelphia, Drummond’s per 36 minutes states (12 ppg, 17.4 RPG, 1.4 bpg) at least provide the 76ers some confidence that he will hold his own with a lot more time on the court.