The Miami Heat and Milwaukee Bucks face off in an NBA Playoffs rematch from last year. Here are four keys for this upcoming first-round series.

The Miami Heat have a difficult challenge ahead of them with the Milwaukee Bucks in the first round as they look to make another run to the NBA Finals.

Milwaukee won the season series 2-1 with the last win coming on the first night of a back-to-back that ended the regular season. However, Heat superstar Jimmy Butler didn’t play in a single game against the Bucks this season.

Here are four keys to watch for as the Bucks and Heat battle it out for the second straight year in the NBA Playoffs. 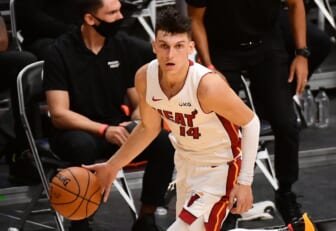 Can Jrue Holiday give the Bucks a needed playoff boost?

The Bucks gave up many first-round picks and pick swaps to land Jrue Holiday from the New Orleans Pelicans this last offseason. This was done to pair Giannis Antetokoumpo and Khris Middleton with a third defensive star.

This could be the biggest difference-maker in this rematch from last year’s NBA Playoffs. Holiday has averaged 17.0 points, 4.5 rebounds, and 5.5 assists in 30 career playoff games. This was better than Bledsoe’s performance last year.

Bledsoe averaged 11.8 points, 5.8 rebounds, and 5.0 assists in four games against the Miami Heat in the playoffs, but he only shot 33.3% from the field and 21.4% from deep. His shooting hurt the Bucks due to Miami’s defensive scheme.

Milwaukee traded for Holiday to contribute during the NBA Playoffs. They need his defensive prowess and scoring ability as they look to serve revenge to the defending Eastern Conference champions.

The Heat must limit Bucks from 3-point line

The Bucks are the fifth-best 3-point shooting team in the NBA this season. They are fifth in both makes and percentage, which is important due to the scheme Miami used on defense last year.

The idea was to stop Antetokounmpo and make the other players make shots when it counted. Well, the Bucks have made improvements to do just that and the Heat can’t and won’t use the same logic as last season.

But, Milwaukee did not finish well shooting from deep. They ranked 14th in treys made and 15 in percentage during the last 10 games. This includes one performance against the Heat where they sank 13 triples at a 37.1% clip.

The Heat didn’t have Jimmy Butler in that game, so it’s hard to take away much from it. The Heat ranked as the 23rd best team in the number of opponent 3-pointers made in the last 10 games. But, the Bucks are ranked dead-last in the NBA during the same timeframe.

The Miami Heat have been hot as of late and with Duncan Robinson and Tyler Herro, they should be the ones that need to be stopped from beyond the arc.

Milwaukee needs other players to make shots outside of Antetokounmpo. If not, Miami could put the Bucks through very rough stretches offensively in this series.

It’s hard for someone to say that Giannis Antetokounmpo needs to improve over what he did last year against Miami, but that’s the case as he gears up again.

Antetokounmpo averaged 21.8 points, 11.0 rebounds, and 5.3 assists in four games against the Heat in the NBA Playoffs last season. Those aren’t bad statistics by any means, but they need to be better if the Bucks want to come away victorious.

But, what if the regular season was a sign of things to come for the two-time MVP award winner? Antetokounmpo averaged 16.7 points, 9.3 rebounds, and 6.7 assists while averaging 32.0 minutes against the Miami Heat this season.

Antetokounmpo averaged 33.0 minutes during the regular season, so it’s not like he was not playing as much against Miami. The 26-year-old start shot 56.9% from the field this season, but only 48.7% against the Heat.

Perhaps, Miami has Antetokounmpo’s number and if this happens again, Milwaukee will be going home quick. The Bucks need Antetokounmpo to be better than he was against Miami this season.

Jimmy Butler will need to leave everything on the court

Jimmy Butler could be the most confident player in the entire NBA. Butler has proclaimed that he’s “stupidly locked in” for the playoffs,” while Antetokounmpo doesn’t know if this year will be different than last.

Butler has shown that he can be lights out when it matters. The 31-year-old star went toe-to-toe with one of the greatest NBA basketball players ever in last year’s NBA Finals and won a slugfest in Game 5.

There’s a light that turns on when playoff time hits for Butler. There will be times during the regular season where the Miami Heat won’t be locked into a game, but when Butler is locked in during the playoffs, the team will follow through for him.

The well-known picture taken of Butler where he is leaning on the railing after being fouled is what he will do again. He will leave everything on the floor and even his teammates know there is something special that happens to him at this time of the year.

If Miami wants any chance of taking down the NBA’s best teams they will need Butler to perform like the superstar we have all learned to respect. There’s no denying that he may feel like the Heat have been disrespected after being snubbed from the All-Star game and other awards.

Now, it’s gut-check time. Only the best of the bests will be able to advance and play even better when the lights start to shine brighter. Heat vs. Bucks, Butler vs. Antetokounmpo, and it all starts Saturday afternoon in Game 1.