3 reasons why the Los Angeles Clippers can surprise this season 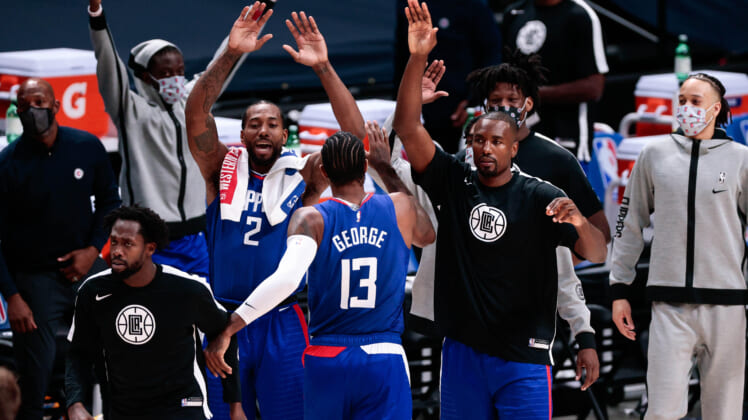 As the 2022-’23 NBA season draws closer, there is plenty of buzz about which teams will take a step forward. It should come as no surprise that the Los Angeles Clippers are one club everyone will be keeping an eye on.

Despite having two All-Stars on their roster, the Clippers underachieved last season and fell far short of massive expectations. After a busy offseason, many in the franchise and even those around the NBA expected a quick turnaround.

The Clippers battled injuries, constant roster changes, and a tough Western Conference. Their All-Stars Kawhi Leonard (torn ACL) and Paul George (elbow injury) each missed a significant portion of the season. While the seven-time All-Star returned for a late return, an early Clippers’ exit in the Play-In Tournament ended the season on a sour note.

It could be thanks to that painful loss in the playoffs and several key factors that the Clippers could be a surprise team this year.

This year’s offseason was full of surprising moves. One of those big surprises was John Wall’s signing with Los Angeles.

Wall and the Houston Rockets were finally able to reach a buyout agreement. This was after last season when Wall sat out the entire 2021-22 season. The Clippers got him for a good deal as well, landing him on a two-year deal for $13.2 million.

Looking at the stats from the 2020-21 season, It’s not bad. For a player who suffered an Achilles tear, averaging 20 points for 40 games isn’t bad. Although there is a huge question mark on his ability to be healthy, the Clippers shouldn’t worry that much. If we take a look at their roster, they still have Reggie Jackson and he’s done a great job at being their starting point guard.

As I’ve mentioned earlier, Los Angeles signed a five-time All-Star on a two-year deal as a healthy Wall could be a steal as he provides reliable scoring off the Clippers’ bench. That is if they choose to let him run the second unit. Additionally, they were able to keep Nicolas Batum, Ivica Zubac, and Amir Coffey.

All three guys were solid contributors last season. Especially Coffey who had an under-the-radar breakout year in the 69 games he played last season. Lastly, Los Angeles was able to give Robert Covington a contract extension. Having him around means their defense will have a significant improvement next season.

Topping off my list is the return of Leonard and George. After spending most of last season rehabbing their injuries, both players are poised to be fully health and they could create havoc against the best NBA teams.

Although both stars haven’t achieved noteworthy success since joining forces, I have a strong feeling they’ll make a huge impact next season. Out of all the tweaks in the roster by the Clippers’ front office, this iteration of the Clippers might be the one that would help them win it all. Both stars finally have a decent supporting cast with them and I hope they don’t waste this opportunity.

With their return, the Clippers will be able to run coach Tyronn Lue’s system flawlessly. The team will be harder to defend, too. Both George and Leonard are threats from anywhere on the floor. Add to that, Jackson is a well-capable guard on the offensive side. The front office also surrounded the duo with long-range snipers. So, if you’re the defense, how do you guard them?

Overall, the Clippers are going to be a fun team to watch next season. The combo of George and Leonard will be lethal.