2020 Hockey Hall of Fame inductees finally got their rings

More than just the 2020-2021 NHL regular season was affected by the pandemic.

But, finally, the inductees get their ceremony, and rings were presented to the six honorees on Friday, November 12. Jarome Iginla, Marion Hossa, Ken Holland, Doug Wilson, Kevin Lowe and Kim St-Pierre all stood in the Great Hall of the Hockey Hall of Fame–the usual home of the Stanley Cup–to accept their awards.

Ken Holland, the current general manager of the Edmonton Oilers, was inducted as a Builder, as he led the Detroit Red Wings to an impressive 22-year run. In his post as general manager, he saw them win three Stanley Cup Championships and win 1,044 combined regular season and playoff games, more than any other NHL franchise.

“I am incredibly humbled by this honour,” Holland said in a statement. “I am in this game because I loved it as a young man and I am happy to have been able to stay in the game.” So far this season, Holland and the Oilers are off to an incredible 10-3-0 start on the season.

Jarome Iginla, Marion Hossa, Kevin Lowe and Doug Wilson were all selected in the Player category for their achievements in the NHL and the Olympics, and Kim St-Pierre was selected for her time goaltending in the CWHL and on Canada’s national team.

Iginla is one of the most beloved captains in Calgary Flames history, and represented Team Canada in the Olympics in both 2002 and 2010. “It’s a very special time. The whole process, it makes you remember there’s so many things to be grateful for,” Iginla said. “It’s all been so fun, just an amazing experience.”

“I never imagined myself being here, and it’s such a treat,” Lowe said. The former blueliner was part of one of the greatest dynasties to ever grace the NHL, the Edmonton Oilers in the 1980s–Wayne Gretzky’s time in the blue and orange. “I was with Wayne very early, when he scored 50 in 39. We knew greatness was among us,” he said.

Former Ottawa Senator and Chicago Blackhawk Marian Hossa is honored to be one of the three Slovakia natives in the Hockey Hall of Fame, but is also proud to hang his jersey between some of his heroes, including Jaromir Jagr, Mario Lemieux and Wayne Gretzky. “I have learned so much about life through the game of hockey and am very appreciative of this recognition,” he said. 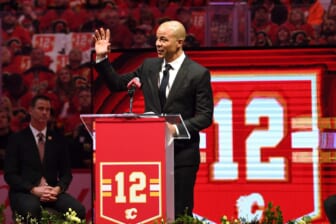 Also Read:
Hockey Hall of Fame to induct Class of 2020 in November

Another former Blackhawk, Doug Wilson played in Chicago for 14 seasons, and he led the club’s blue line in points for ten consecutive campaigns. He was then traded to San Jose in 1991, where he was one of the then-expansion team’s newest players. “Our first year and the very first team, it was just a group of pioneers,” he said. He later moved into team management, after ending an impressive career that saw him record 237 goals and 590 assists in 1,024 NHL games.

St-Pierre is one of the most prolific goalies in Canadian women’s hockey, posting a career 1.17 goals against average and a .939 save percentage. But, she is part of another piece of history, as women only received their own subcategory in the Hockey Hall of Fame in 2010, making her one of the earliest female inductees. “Now that women are introduced in the Hockey Hall of Fame, it makes me so proud,” she said. “When I was growing up it was only boys and when that changed my dream was able to come through. I’m grateful and would like to thank all of my coaches and my family.”