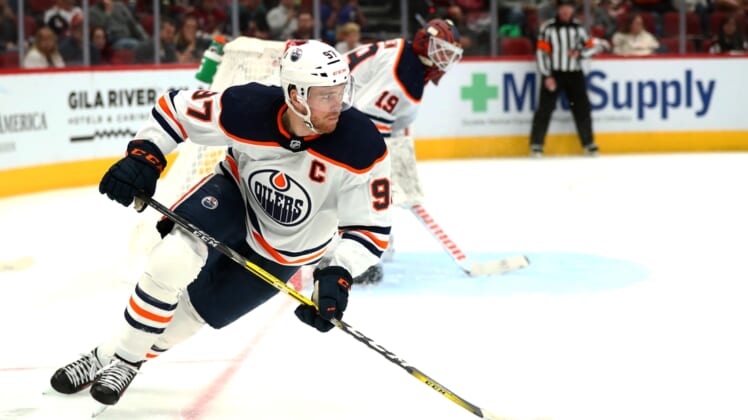 Connor McDavid scored twice in a three-point game and Zach Hyman also scored twice to lead the visiting Edmonton Oilers to a 5-1 victory over the Arizona Coyotes on Thursday.

Warren Foegele also scored for the Oilers, who received a 26-save performance from goaltender Mikko Koskinen to earn their fourth victory in as many games this season. Ryan Nugent-Hopkins collected three assists.

Dysin Mayo scored in his NHL debut for the Coyotes, while goalie Karel Vejmelka stopped 26 shots. Arizona has lost all four of its games this season.

Foegele’s first goal of the season to open the scoring with 1:58 remaining in the opening frame was a highlight-reel tally. Foegele slipped around Mayo before chipping a shot past Vejmelka.

Hyman’s shorthanded tally at 6:31 of the second period doubled the lead. Hyman was sprung on an odd-man rush and whipped a glove-side shot inside the far post for his second of the season.

McDavid’s 200th career NHL goal extended the lead. McDavid netted his fifth goal of the season before the midway point by gaining the puck at the point, weaving to the slot and then firing a perfect shot home.

Mayo, the 25-year-old defenseman who spent four seasons playing junior hockey in Edmonton, skated in his first NHL game after six full seasons in the minors. He put the hosts on the board 85 seconds into the third by pinching from his point position to get the puck and snapping a top-corner shot for the milestone marker.

However, power-play goals by both Hyman and McDavid in the middle of the final frame sealed the game. The Oilers have scored seven goals in 14 man-advantage opportunities this season.