It takes time to determine the true value of a player. The 2015 NFL draft figures to have plenty of good value picks, but none will be as valuable as Arizona Cardinals third-round pick, running back David Johnson.

The Northern Iowa product is a prototypical three-down back, which is something Cardinals coach Bruce Arians covets. In his first two seasons with Arizona, the 2014 NFL Coach of the Year brought in Rashard Mendenhall and Jonathan Dwyer—two big, bruising three-down-back-types—but neither had much success for various reasons.

Johnson is a home-run pick for Arians, general manager Steve Keim and the Cardinals organization.

At 6-foot and 224 pounds, Johnson has plenty of size to handle the punishment of NFL defenses over several 250- to 300-touch seasons. But being a punishing runner with enough speed to outrun a defense is not the biggest reason he is the best value pick of the draft.

His hands are what seal it.

The Cardinals stable of running backs led the NFL in Drop Rate a year ago, mishandling a staggering 16.7 percent of catchable targets. Andre Ellington, the back who some thought could be the bell cow in Arizona, dropped eight passes all by himself, which led all running backs, according to Pro Football Focus (subscription required). 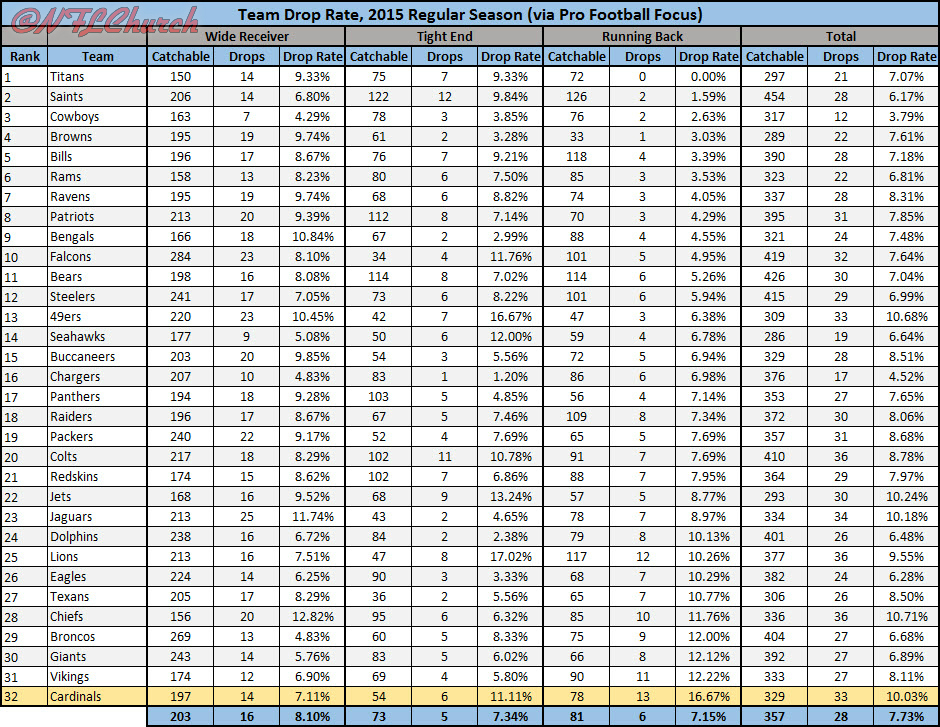 Johnson, a former high school wideout, racked up at least 32 receptions in all four years while at Northern Iowa by running crisp routes and possessing the moves necessary to get open. He notched five receptions for an impressive 203 yards and a touchdown against the Big Ten’s Iowa Hawkeyes at the outset of the 2014 season.

In this play, you can see Johnson has no problem faking out Iowa linebacker Quinton Alston en route to a 69-yard score.

He is impressive after the catch as well. Whereas all he had to do is outrun the defense above, below we see his ability in the open field. Pay attention to the sideline awareness and agility to cut back toward the middle and run through tacklers.

“[Johnson] reminds me a lot of Matt Forte coming out of Tulane—[he] may be a little faster. Just a three-down player, a good pass-blocker; he’s got all three phases right now. And again, captain of the team, great leader—all the things you’re looking for [in a player].”

The three phases to which Arians referred are the running game, the passing game and as a blocker in both aspects of the offense. Johnson has the ability to do it all, which means he won’t have to sit and watch while he works on getting better as a receiver or blocker.

Here is Johnson throwing his big frame into bigger defenders, winning as a pass-blocker.

You’ve seen him in the passing game as a receiver and as a blocker. But how about the moneymaker? Shades of Adrian Peterson…

Because he is an immediate-impact player, the Cardinals don’t have to add a veteran running back to contribute as they have the past two offseasons.

Johnson fills so many roles for the team that Arians has the luxury of not worrying about whether adding (insert veteran free agent) would help or hurt the team chemistry and whether he can acclimate into the offense; he can focus on preparing his stud rookie to go out and punish defenses in the trenches behind his much-improved offensive line.

Considering at age 26 Ellington is the oldest running back on the roster, it would not hurt for the Cardinals to add a veteran to help the others grow as professionals. But in terms of getting on-field production from a veteran, the team does not need it.

It won’t take long for Arians, Keim and the Cardinals to see a positive return on their third-round investment. With the tools he has, Johnson could be the first rookie drafted in the third round or later to start Week 1 since Washington’s Alfred Morris did so in 2012.

If he does, it means Ellington will be back to playing the role he had as a rookie—coming off the bench in a spell-back role. And that might be the best thing for his career.

He became the first rookie since Ickey Woods in 1988 to lead the NFL in yards per carry when he averaged 5.5 in 2013. But after adding 10 pounds in his second offseason, Ellington was plagued by injuries all of last year and ended up playing only 12 games and averaging only 3.3 yards per carry before sitting out the final month with foot and hip injuries.

That is Johnson’s indirect value. Ellington was injured and overworked last season. Allowing him to come off the bench to pick apart defenses in a part-time role will keep him fresher, meaning he should be able to improve upon his disappointing 2014 YPC average.

The outlook of the Arizona run game was already much brighter than it was a year ago thanks to the addition of prize free agent left guard Mike Iupati. Johnson only increases the expectations of the ground game, as well as the aerial attack because of his receiving and blocking ability.