Zion Williamson ‘locked in’ with Pelicans after signing big deal 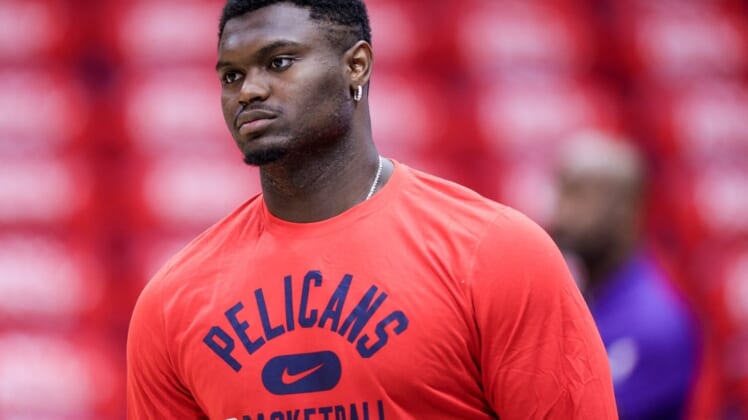 Zion Williamson put pen to paper on Wednesday, signed his name, looked up and said “I’m locked in, baby.”

That’s the phrase the New Orleans Pelicans have been waiting to hear. Williamson firmed up his commitment to the team on his 22nd birthday by signing a five-year deal that could be worth up to $231 million.

Asked where this ranks among birthdays, Williamson said, “Number one.”

The deal is worth at least $193 million with escalators for winning MVP honors, being named Defensive Player of Year or making an All-NBA team.

There are no player options in the contract so Williamson will be part of the Pelicans for five seasons, barring a trade.

Williamson missed all of last season due to a broken right foot and has played in just 85 games over his first three seasons. He said he is eager to return to the floor healthy.

“Thank y’all for believing in me,” Williamson said. “Just giving a kid like me a chance to showcase my abilities and hopefully help bring the team multiple championships. Thank y’all for sticking with me the past year.

The No. 1 overall pick in the 2019 NBA draft from Duke has been productive when healthy. He has averaged 25.7 points and 7.0 rebounds while shooting 60.4 percent from the field.

On June 11, Williamson expressed to reporters that he wanted to remain with the club.

Less than a month later, Pelicans owner Gayle Benson was happy to lock up the young star.

“We are building a foundation of sustained success. We have a wonderful mix of young talent and veteran leadership and adding Zion long-term to this roster is something that I know our fans are very excited to see come together on the floor this season and for many seasons to come,” Benson said in a statement. “Zion’s talents are not only transformative on the court, but his commitment to our community, our city and region will also be transformative. What a wonderful birthday for him and his family.”

“Zion is an astounding 22-year old talent, who we believe is just scratching the surface of what he is capable of, both on and off the floor,” Griffin said. “We are extremely pleased to take this next step of our collective journey together.”

There was heavy speculation last season that Williamson didn’t want to be with the Pelicans long-term. He addressed that type of talk on Wednesday, saying it was a “roller coaster of emotions” for him and his family.

“In the beginning of the season, I told the world, ‘If y’all ever want to know if I want to be here.’ Instead of asking me, the world just ran with narratives,” Williamson said. “So when my family was going out in public on why we don’t like New Orleans, why we don’t want to be here when that’s not the case at all. I wasn’t able to play because my foot was broke. So that sucked.

“Every time I checked my phone, it was always negative. Even when you’re trying to make a positive of the situation, it was very tough.”

Williamson resumed basketball activities on May 26 and will enter training camp fully healthy.

The Pelicans made the playoffs without him as Brandon Ingram and CJ McCollum led the way. New Orleans also has promising young players such as Herb Jones and Jose Alvarado.

“I want to prove that I’m a winner,” Williamson said. “It’s as simple as that. I want to win with coach (Willie Green) as well as with my teammates. The ultimate goal is to win the championship. I feel like that’s what we’re all striving for.”