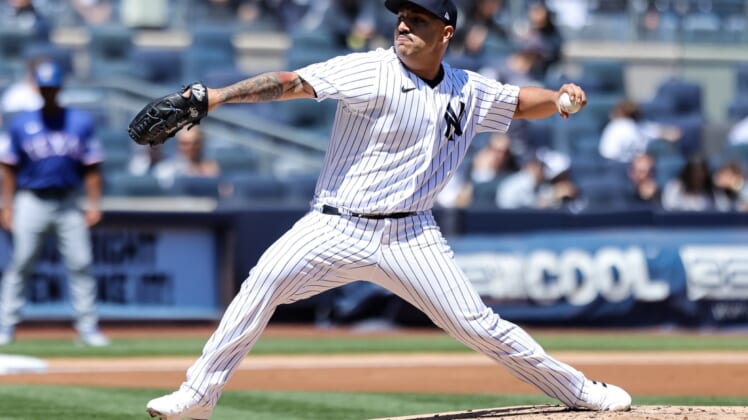 Nestor Cortes came within five outs of a no-hitter before allowing a single to Eli White, and the New York Yankees pushed across a run in the eighth inning to beat the Texas Rangers 1-0 on Monday afternoon at Yankee Stadium.

Anthony Rizzo hit an RBI double for the Yankees, who won for the 13th time in 15 games and joined the crosstown New York Mets as the second team in the majors with 20 wins.

Clay Holmes (4-0) relieved Cortes and needed four pitches to get Marcus Semien to bounce into a double play.

Cortes ended the sixth inning at 74 pitches by striking out Adolis Garcia. The Yankees had Chad Green warming up when Cortes stranded two by getting Kole Calhoun to ground into the shift to end the seventh.

Cortes was bidding to throw the 13th no-hitter in team history and the second against Texas in less than a year. On May 19, 2021, Corey Kluber no-hit the Rangers on 101 pitches in Texas when he faced one hitter above the minimum.

Texas came within five outs of being no-hit for the third time in the past two seasons. The Rangers were also no-hit on April 9, 2021 in San Diego by Joe Musgrove.

Aroldis Chapman, in his first appearance since May 1 at Kansas City, pitched a scoreless ninth for his seventh save. He allowed a two-strike, two-out single to Jonah Heim and a stolen base to pinch runner Brad Miller before getting Nick Solak to fly out.

The Yankees were held to three hits through the first seven innings against Jon Gray and Brock Burke before opening the eighth with consecutive one-out hits off Brett Martin (0-3).

Aaron Judge singled and scored when Rizzo dropped a double to the gap in left-center field.

Gray exited for precautionary reasons with left knee soreness after getting the first out of the fifth, and Burke loaded the bases before striking out Judge and Rizzo.