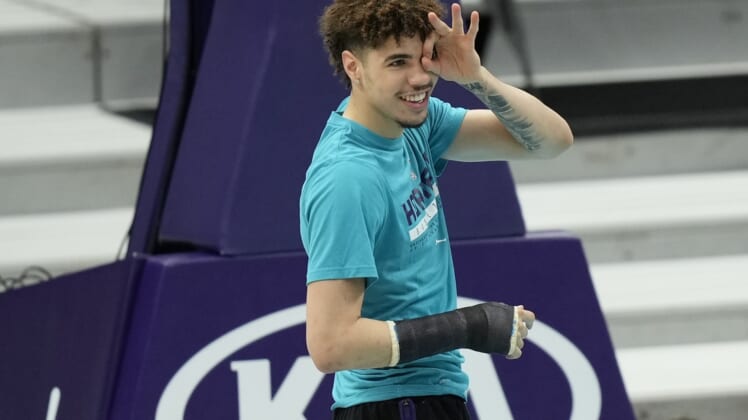 Apr 14, 2021; Charlotte, North Carolina, USA; Charlotte Hornets guard LaMelo Ball (2) on the court during pre game shoot a round before the game against the Cleveland Cavaliers at the Spectrum Center. Mandatory Credit: Jim Dedmon-USA TODAY Sports

Ball sustained the injury on March 20 in a game against the Los Angeles Clippers. He was examined by Dr. Michelle Carlson of The Hospital for Special Surgery in New York before receiving the green light on Monday.

The team said updates about his status and return to play would be “provided as appropriate.” ESPN reported that Ball could return to action in seven to 10 days.

Ball, 19, was named the Eastern Conference Rookie of the Month in January, February and March. He is the only player over the past 60 years to lead all rookies in total points, rebounds, assists and steals heading into the All-Star break.