Worst starting quarterbacks of all time for each NFL team 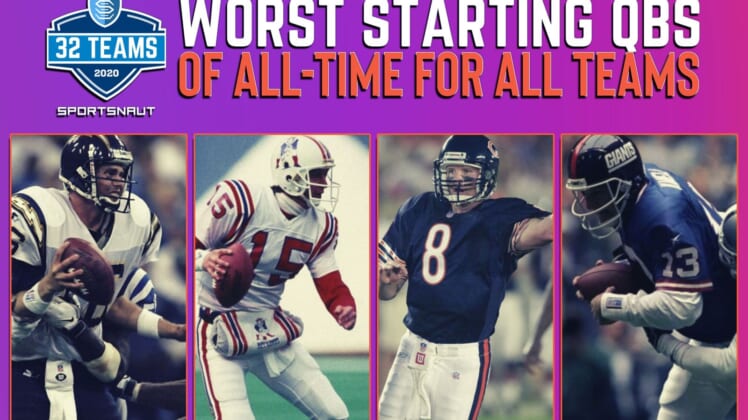 The Jaguars have been brutally bad about picking quarterbacks in recent years, but Blaine Gabbert was the worst of the bunch. The 10th overall pick in 2010, Gabbert started 27 games in three seasons for Jacksonville, going 5-22 during that stretch. Prone to mistakes, he completed 53.3% of his passes for just 4,357 yards in those three seasons, along with 22 touchdowns and 24 interceptions.

A first-round pick out of Tulane in 2004, J.P. Losman had one semi-decent season in 2006 before quickly flaming out. Overall, he went 10-23 as a starting quarterback for the Bills, completing 59.3% of his passes for 6,211 yards with 33 touchdowns and 34 interceptions.

The Rams have featured some legendary gunslingers in their history. Steve Dils, on the other hand, is a guy who was never supposed to be “the guy” but who was forced into action out of necessity. In four seasons with Minnesota, Dils started nine games, going 4-5. He completed 47.6.9% of his passes over that span for a grand total of 1,383 yards with 10 touchdowns and nine interceptions.

Before the Titans struck out on Marcus Mariota, they took a home-run swing at Jake Locker, who was selected No. 8 overall out of Washington in 2011. Locker had significant accuracy issues coming out of college, and at the NFL level those were only exasperated. He lasted just four years in the NFL, going 9-14 as a starter while throwing 27 touchdowns, but also 22 interceptions.

It’s hard to believe a guy like Steve DeBerg could have the kind of longevity he did if he were playing in today’s NFL. He was a turnover machine. During his tenure with the Buccaneers, DeBerg went 8-29 as a starter, during which time he threw 62 interceptions. We could have also featured him as the worst 49ers quarterback of all time as well, as his career certainly was remarkable in a unique way.

One of the biggest busts in NFL history, Akili Smith went from being the third overall pick in 1999 to being a guy nobody would sign just a few years later. He went 3-14 in four seasons with the Bengals, completing 46.6% of his passes for 2,212 yards with five touchdowns and 13 interceptions.

Speaking of busts, Johnny Manziel saw his career flame out very quickly due to his love of partying and lack of discipline. A first-round pick in 2014, he started eight games in two seasons and went 2-6. Manziel was inaccurate (57%) and struggled to make plays downfield, finishing his NFL career with just 1,675 yards, seven touchdowns and seven interceptions passing.

Selected 10th overall in 2006 out of USC, Matt Leinart was a total bust. He started 17 games over four seasons for the Cardinals, going 7-10, while completing an abysmal 57.1% of his passes for 3,893 yards with 14 touchdowns and 20 interceptions. Josh Rosen could be considered, but he was never given a real shot in Arizona.

Ryan Leaf has turned his life around and is now a tremendous inspiration. But when he entered the NFL as the second overall pick in the 1998 NFL Draft, he had big issues. One of the most infamous busts in NFL history, Leaf is best known for losing it in the locker room, and for being an absolutely horrible NFL quarterback. In two seasons with the Chargers (in San Diego), Leaf went 4-14 while completing 48% of his passes for 3,172 yards with 13 touchdowns and 33 interceptions.

Another famous first-round bust, Joey Harrington (No. 3 overall in 2002) somehow stuck around long enough in Detroit to log 55 starts in four seasons. Like many young quarterbacks, he struggled with decision making and threw 62 interceptions while completing just 54.7% of his passes and averaging 177 yards passing per game.

Long before Patrick Mahomes took over the league, the Chiefs were forced to turn to Brodie Croyle out of desperation. He started 10 games between 2007-10, winning exactly none of them. A career 56.7% passer, he finished his career with a thud, passing for just 1,669 yards, eight touchdowns and nine interceptions.

Best known for getting slugged by a teammate and needing to miss time with his jaw wired shut, this former second-round pick had an abysmal time as a member of the Jets. Smith went 12-18 as a starter for New York, completing 57.9% of his passes for 5,962 yards with 28 touchdowns and 36 brutal interceptions.

Randy Johnson was highly touted coming out of Texas A&I (now Texas A&M) but quickly proved he was not up to the challenge in the NFL. In five seasons with the Falcons (37 starts), Johnson won just eight games, completing 48.1% of his passes for 5,538 yards with 34 touchdowns and 65 interceptions.

There have been a lot of mediocre quarterbacks in Washington history, and Gus Frerotte certainly can be described as such. He started 46 games in his first five years as a pro with Washington and went 19-26-1 during that stretch. Frerotte would complete just 52.3% of his passes for Washington, passing for 9,769 yards with 48 touchdowns and 44 interceptions, though he did make the Pro Bowl in 1996.

The first overall pick of the 2002 NFL Draft, David Carr was also the first pick ever for the Houston Texans. A full-time starter for the first five years for the fledgling franchise, Carr was all too often a punching bag for opposing defenders. He finished his Texans career with a 22-53 record, having completed 60% of his passes for 13,391 yards with 59 touchdowns and 65 interceptions.

While many remember the Jack Trudeau era as a dark time for the Colts, Curtis Painter made him look like Joe Montana. Painter was thrust into the starting lineup in 2011 when Kerry Collins (who was starting for the injured Peyton Manning) was hurt. He went 0-8 as a starter that year, completing 54.3% of his passes for 1,541 yards with six touchdowns and nine interceptions.

Desperate to fill the void left by Brett Favre after the 2010 season, the Vikings used the 12th overall pick in 2011 on Christian Ponder, whom many believed was overdrafted by a long shot. That proved to be the case, though in 2012 it appeared he was going to work out. Ultimately, Ponder took a nosedive in 2013 and never recovered. He finished his career with a 14-21-1 record, having completed 59.8% of his passes for 6,658 yards with 38 touchdowns and 36 interceptions.

When Dan Marino retired, the Dolphins took a long time to recover. On second thought, they still haven’t recovered. Of all the guys who lined up under center since that time, though, Chad Henne stands out as having been particularly bad. He went 13-18 as a starter, tossing 37 interceptions in 31 starts before giving way to Matt Moore, and ultimately Ryan Tannehill.

This big-armed quarterback was the 19th pick of the 2003 draft, but he was not the franchise savior the Ravens hoped for. Starting 42 games, Boller went 20-22 in five seasons. Accuracy was a problem, as he completed 56.9% of his passes for 7,846 yards with 45 touchdowns and 44 interceptions.

This former Golden Domer had a short, miserable NFL career. He started 10 games for the Panthers as a second-round rookie in 2010, winning just one game. The poor guy completed 52.5% of his passes while throwing for just 1,558 yards with three touchdowns and nine interceptions.

It’s not Bobby Hoying’s fault he was forced to be a starting quarterback for the Eagles before the Donovan McNabb and Michael Vick eras. It just happened that way. Unfortunately for him, his time spent in Philly was memorable for the wrong reasons. Hoying went 3-9-1 as a starter between 1997-98, completing 53.9% of his passes for 2,534 yards with 11 touchdowns and 15 interceptions.

Arguably the biggest bust in modern NFL history, JaMarcus Russell went from being the No. 1 overall pick of the 2007 NFL Draft to being out of the league in just three short, tumultuous years. He was accused of not taking meetings and practice seriously, and his play reflected that lack of passion. Russell went 7-18 as an NFL starter, completing 52.1% of his passes for 4,083 yards with 18 touchdowns and 23 interceptions.

Early on in his career, Danny Kanell appeared to be on his way to becoming a potential NFL star. He went 7-2-1 in his first year as a starter in 1997, but from that moment on it all went downhill fast for the former FSU star. Kanell would go 3-7 the next season and was then cut ahead of the 1999 season so the Giants could sign Kerry Collins.

Cade McNown was supposed to resurrect the Bears’ franchise as a first-round pick out of UCLA in 1999. Instead, he became infamous for his inability to do so. He went 3-12 as a starter, completing 54.6% of his passes for 3,111 yards with 16 touchdowns and 19 interceptions. Poor play and injuries derailed his career, which saw him register stats in just two seasons as a pro.

Selected second overall in 1993 out of Notre Dame, Rick Mirer was expected to usher the Seattle Seahawks into a new era of prosperity. Instead, he proved to be a heave-it-and-pray gunslinger who completed just 53.4% of his passes while tossing 56 interceptions in 51 starts for Seattle. In four years, he went 20-31 as a starter before being traded in 1997.

It was pretty stunning to see NFL legend Ken Stabler end up on this list. By the time he landed in New Orleans, however, “Snake” was a shell of his former self. Stabler went 11-11 as a starter for the Saints, but his play was even worse than that record. He threw just 17 touchdowns and tossed 33 interceptions in the final 22 games of his storied career.

The 49ers went from Joe Montana to Steve Young to Jeff Garcia to Tim Rattay, who gave way to Ken Dorsey during a miserable 2004 campaign. Dorsey was not an upgrade to Rattay, going 2-8 as a starter from 2004-05. Even worse, he gave the offense little hope, completing 54.1% of his passes while tossing eight touchdowns and 11 interceptions.

Steve Ramsey was a career journeyman who started 31 games in six seasons with the Broncos. Playing in an era that favored defenses far more than what we see today, he struggled in a big way. Ramsey completed 49.6% of his passes in Denver, registering 6,437 yards with 35 touchdowns and a staggering 58 interceptions.

The Packers are known for having featured some of the most legendary quarterbacks in NFL history. Randy Wright was not one of them. He came into the league without much fanfare as a fifth-round pick, and it’s not hard to see why. In five seasons, he started 32 games for the Pack, going 7-25 while completing 53.8% of his passes for 7,106 yards with 31 touchdowns and 57 interceptions.

One of the NFL’s premier franchises, Pittsburgh has featured some legends. In between all that, though, the organization hit some rough patches. The Bubby Brister era was, putting it mildly, pretty bad. Brister started 57 games for the Steelers, going 28-29 while completing 52.5% of his passes while averaging an interception per start. At least he was consistent.

Before Tom Brady and Drew Bledsoe, the Patriots spent years in quarterback purgatory. During that time, Marc Wilson was called into action at the tail end of his career, and it turned out badly for him and the organization. From 1989-90, he started nine games, going 1-8 while completing 51.6% of his passes for 2,631 yards with nine touchdowns and 16 interceptions.

A phenomenal athlete, Quincy Carter waffled between baseball and football before turning pro. Ultimately, he chose football, and in 2001 he landed in Dallas as a second-round pick. He started 34 games in three seasons, going 16-15 while completing just 56.2% of his passes for 5,839 yards with 29 touchdowns and 36 interceptions.