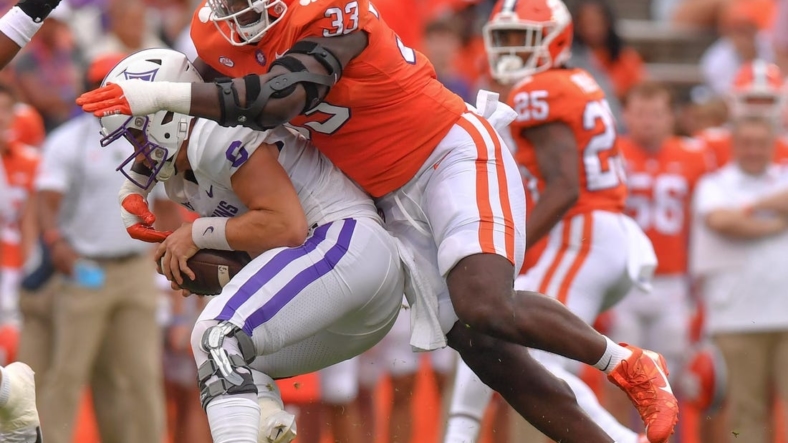 Although No. 5 Clemson’s offense wasn’t particularly dominant, Will Shipley ran for 68 yards with a pair of touchdowns to lead the Tigers past Furman 35-12 on Saturday afternoon in Clemson, S.C.

Quarterback D.J. Uiagalelei completed 21 of 27 passes for 231 yards, including two touchdown passes, as Clemson scored touchdowns on its first three possessions of the game.

Jake Briningstool and Beaux Collins each had a receiving touchdown, and Kobe Pace ran for another score to aid Shipley’s strong performance on the ground.

The Tigers (2-0) had a 28-9 lead at halftime and cruised the rest of the way. Head coach Dabo Swinney won his 152nd career game, and Shipley raised his touchdown total to four on the season after two last week against Georgia Tech.

Furman (1-1) was held to a pair of Alex Lepvreau field goals and a Tyler Huff touchdown pass to Ryan Miller late in the second quarter. That touchdown made it a 21-9 game, but that was the closest the Paladins would get.

Huff went 30-for-39 for 256 yards with a touchdown and interception. He connected with Miller 13 times for 95 yards. Furman’s offense outgained the Tigers 384 total yards to 376, but Clemson’s defense stopped Furman twice on downs in the game.

Uiagalelei completed passes of 40 and 25 yards to set up a Clemson touchdown in the Tigers’ first possession of the game. Before the first quarter was over, the Tigers had already built an early 14-3 lead.

Shipley ran off the right side of the offensive line almost completely untouched for a 17-yard touchdown run in the second quarter to make it 21-3.

The first-ever football game in Clemson history came against Furman in 1896, a 14-6 Tigers win. Clemson is 44-10-4 all-time against Furman including a streak of 32 consecutive wins, Clemson’s longest winning streak against any opponent.