Wes Roach on the ninth green during the second round of the Rocket Mortgage Classic at the Detroit Golf Club in Detroit on Friday, June 28, 2019. golf

A cluster of players, including home-state favorite Dustin Johnson, jockeyed for position atop the leaderboard of the PGA Tour’s new Palmetto Championship at Congaree on Thursday.

One man broke through for the solo lead at the end of the day — his first time in 88 starts.

Wes Roach used a 6-under-par 30 on his first nine holes to finish at 7-under 64, capturing the first-round lead at Congaree Golf Club in Ridgeland, S.C.

World No. 1 Johnson, Chesson Hadley, Doc Redman and South Africa’s Erik van Rooyen are a stroke behind at 6 under. Jhonattan Vegas of Venezuela shot a 5-under 66 for sixth place, a shot ahead of a 12-way tie at 4 under.

Roach, 32, has bounced between the PGA Tour and the Korn Ferry Tour since 2014, losing and regaining his PGA Tour card twice in that time. Thursday marked the first time he led a PGA Tour event after any round in his 88 starts.

“It feels great. Hard work paying off a little bit,” Roach said. “It’s just 18 holes and there’s a long ways to go, but I’m just going to do my best to stay present out there and just continue to hit quality shots.”

Roach holed out his 105-yard approach shot from the fairway on the 633-yard, par-5 fourth hole for an eagle, putting him 4 under through four. He finished the day with six birdies and only one bogey. 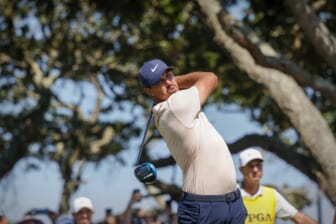 Roach has never finished better than tied for third in a PGA Tour event, and his best finish of the season was a tie for 13th at the Puerto Rico Open in February. He credited a putter change for his strong round in which he led the field in strokes gained putting.

Johnson, a native of Columbia, S.C., who played at Coastal Carolina University, turned in a bogey-free 65 and finished strong, with four of his six birdies coming on his second nine. Johnson has never won a PGA Tour event in his home state.

“It’s been a lot of fun,” Johnson said. “Obviously I get a lot of support here in South Carolina, being I’m a South Carolina native, and, yeah, it’s been great. Hopefully I can keep it rolling for the rest of this week.”

Johnson reached 6 under on his last hole with a chip-in birdie from off the green that traveled about 81 feet before rolling in.

It’s the first time the tour has visited Congaree, which opened in 2018 in the southern part of the state less than an hour from Hilton Head Island. The RBC Canadian Open was canceled for the second straight year due to the ongoing challenges of cross-border travel during the pandemic, so the PGA Tour created a one-year replacement to fill the spot on the schedule.

Many are using it as their final tune-up before next week’s U.S. Open at Torrey Pines in San Diego. Tyrrell Hatton and Matt Fitzpatrick, two highly ranked English players, shot even-par 71. Brooks Koepka is 1 over after a 72.