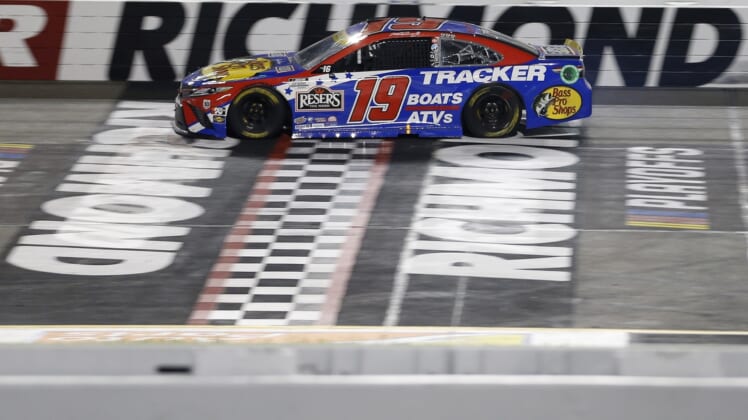 With six different winners in as many races and the first short track event up next for the new 2022 Next Gen race cars, it’s hard to imagine a more compelling start to a NASCAR Cup Series season.

The Toyota Owners 400 at the 0.75-mile Richmond (Va.) Raceway on Sunday (3:30 p.m. ET on FOX, MRN and SiriusXM NASCAR Radio) officially ushers in the short track portion of the schedule — three consecutive races on tracks less than a mile in length.

Bowman’s win at Las Vegas earlier this month helped further an amazing run of victories among drivers under 30 years old. All six races this year — from 23-year-old rookie Austin Cindric winning the season-opening Daytona 500 to 29-year-old Ross Chastain winning last week at COTA — have been won by drivers younger than 30.

Three of those drivers — Cindric, 27-year-old Chase Briscoe (at Phoenix) and Chastain — are first-time winners in the NASCAR Cup Series. And four of the top five drivers in the series standings are also in that sub-30 age category with Elliott, 26, leading Ryan Blaney, 28, by a mere 13 points atop the standings. Bowman is fourth, 25 points back and Chastain is ranked a career high fifth, just 28 points behind Elliott. Joey Logano — at only 31 — is ranked third, 23 points behind Elliott.

Reigning series champion Kyle Larson, 29, who has a 2017 Playoff win at Richmond, would love to reclaim some of that good juju. He’s ranked 16th, 59 points behind his teammate Elliott. He won at Auto Club Speedway and was a runner-up at Las Vegas but his other four finishes this year are 29th or worse, including three DNFs.

And while the “youth movement” is certainly dominating headlines to start 2022, that’s not necessarily so typical of recent history at Richmond.

After Bowman and Larson, the other seven active drivers with previous Richmond wins are over the age of 30. Six of those are former series champions, including the track’s active wins leader Kyle Busch (six wins). Kevin Harvick and Martin Truex Jr. each have three wins. Brad Keselowski, Logano and Kurt Busch have two victories apiece. Veteran Denny Hamlin, 41, a perpetual championship challenger, has three wins as well.

Not only do these drivers bring stellar Richmond resumes, but they also all are highly motivated for that first regular season victory of the year.

Harvick, driver of the No. 4 Stewart-Haas Racing Ford, is another driver who has enjoyed a lot of success at Richmond — seven Xfinity wins in addition to his three NASCAR Cup Series victories. The 46-year-old has a pair of top 10s on the 2022 season and is ranked 12th in points. He’s only finished worse than eighth at Richmond twice in the last 11 races and has three career runner-up showings in addition to his three wins there.

Hamlin, who grew up in nearby Chesterfield, Va., and is a huge crowd favorite at Richmond, is stunningly still looking for his first top-10 finish of the season after suffering through uncharacteristic bad luck even when he’s led races. He’s currently ranked 22nd in the standings, an even 100 points behind Elliott.

Hamlin has to expect Richmond to be a good place for his fortunes to change. He was runner-up in both races last year — leading 207 laps in the Spring and 197 laps in the Fall. In the last 12 races, he has six top-three finishes including a win from pole position in 2016. His 2,108 career laps led at the track is easily tops among the field.

“I’m always excited to go to Richmond,” said Hamlin, who drives the No. 11 Joe Gibbs Racing Toyota. “I have been fortunate to have had a lot of success there throughout my career and especially the last few years.

“Richmond is very unique compared to the tracks we have been to so far with this car,” he added. “So, it’s really going to be up to us to unload close and fine-tune it during practice and qualifying to be ready for the race. But I have a lot of confidence (crew chief) Chris (Gabehart) and our team that we can do that.

Practice for the NASCAR Cup Series race will be on Saturday at 10:30 a.m. ET with qualifying following at 11:15 a.m. ET.

A dramatic finish to last weekend’s race at Circuit of The Americas sets the stage for an exciting NASCAR Xfinity Series short track debut with Saturday’s ToyotaCare 250 (1:30 p.m. ET on FS1, MRN and SiriusXM NASCAR Radio) at the 0.75-mile Richmond Raceway.

The current Xfinity Series driver standings leader Noah Gragson — who holds a slim one-point edge over A.J. Allmendinger — is the defending race winner; taking the trophy at the series’ only 2021 visit last September.

Gragson’s No. 9 JR Motorsports Chevrolet held off Allmendinger’s Kaulig Racing teammate Justin Haley by a mere 0.381 seconds in that race. It bodes well for the 23-year-old Las Vegas native Gragson, who is enjoying his best-ever season start with five top-five finishes — including a win at Phoenix — in the opening six races.

Allmendinger, the only driver to have earned top-10 finishes in all six races this season, finished 18th but led 39 laps at Richmond last year. The driver of the No. 16 Kaulig Racing Chevrolet is looking for his first top-10 at the track in what will be his third Xfinity Series start.

This season’s only multi-time winner, 19-year-old Ty Gibbs, finished seventh in 2021 at Richmond. The driver of the No. 54 Joe Gibbs Racing Toyota is 31 points behind Gragson in the standings. Two of his three top-10 finishes are victories, but he has led only 14 laps on the year.

Veteran Justin Allgaier is the winningest Richmond racer among the fulltime Xfinity drivers. He has two victories, sweeping the 2020 races. It is one of his best tracks with 11 top-10 finishes in 21 starts. The driver of the No. 7 JR Motorsports Chevrolet has twice led at least 100 laps (2017 and 2020) and has top-five finishes in his last five Richmond starts.

Allgaier is ranked fourth, 68 points behind Gragson in the title chase, but is coming off back-to-back rough finishes. He was 34th at Atlanta and 33rd last weekend at COTA.

The 2021 Xfinity Series champion Daniel Hemric could also use a good showing this weekend. The driver of the No. 11 Kaulig Racing Chevrolet has finished 25th or worse in the last three races and hasn’t led a lap since his third place Las Vegas finish four races ago.

The popular Dash 4 Cash incentive program, sponsored by series sponsor Xfinity, makes its 2022 debut this weekend. The four eligible drivers at Richmond are last week’s winner Allmendinger, Gragson, Richard Childress Racing’s Austin Hill and Gragson’s teammate Sam Mayer. The top-finishing driver among the four will win an extra $100,000 cash reward. And the top four Xfinity Series regulars from the Richmond race will be eligible for the big check next week at Martinsville, Va.

Should a JR Motorsports driver win this weekend, it would tie Richard Childress Racing with four consecutive team wins at Richmond.

“Last year we had a really strong Bass Pro Shops Camaro at Richmond, so that gives this team a lot of confidence as we head into this weekend and having another chance to win a Dash 4 Cash race,” Gragson said. “I can’t thank Xfinity enough for allowing us drivers to run for the $100K and hopefully we are walking out of Richmond with another large check but also with a trophy.”