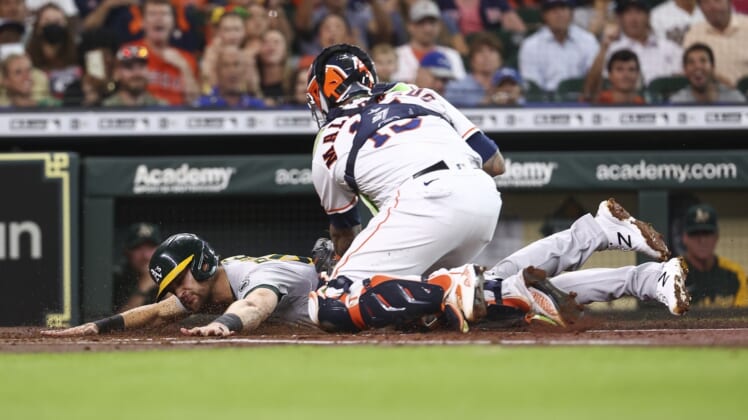 Yordan Alvarez slugged a pair of home runs and Jose Altuve added a two-run single as the Houston Astros rallied from an early deficit to beat the visiting Oakland Athletics 9-6 Tuesday.

Alvarez, making his return from the paternity list after missing the final three games of a four-game set in Cleveland, bashed a two-run homer to center field off Athletics starter Chris Bassitt in the first inning and a three-run shot off Bassitt in the fifth that knotted the score at 6-6.

Altuve greeted Yusmeiro Petit by lashing a first-pitch fastball into center in the sixth, driving in Abraham Toro and Myles Straw and delivering the Astros their first lead at 8-6. Houston trailed 6-2 before rallying with a run in the fourth inning and three-run uprisings in the fifth and sixth.

Houston extended its lead in the American League West to a season-high 4 1/2 games by sending Oakland to its 11th loss in 16 games. The Astros are 8-3 against Oakland this season.

The Athletics knocked Astros left-hander Framber Valdez into the ropes early, recording three hits over the first four pitches, with Matt Olson plating Ramon Laureano with an RBI single for a 1-0 lead. Chad Pinder added a run-scoring single and Jed Lowrie an RBI double, but the latter play included Pinder being erased at the plate on a relay throw from Astros shortstop Carlos Correa.

After Alvarez sliced the deficit to 3-2 with his 15th homer in the bottom of the first, the Athletics added three more runs in the second with Elvis Andrus singling in one, another scoring on a throwing error on a double steal, and an RBI groundout by Olson.

But Valdez finally settled in and, in the fifth inning, delivered his biggest series of pitches to keep the deficit at three runs after Oakland had runners on the corners with no outs.