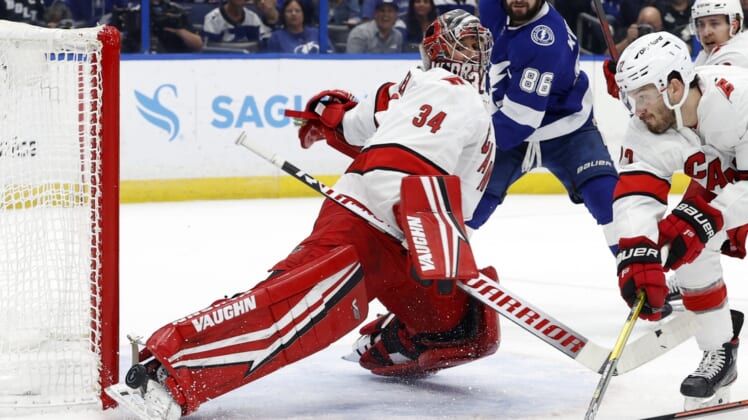 Jun 5, 2021; Tampa, Florida, USA; Carolina Hurricanes goaltender Petr Mrazek (34) makes a save against the Tampa Bay Lightning during the first period in game four of the second round of the 2021 Stanley Cup Playoffs at Amalie Arena. Mandatory Credit: Kim Klement-USA TODAY Sports

Steven Stamkos and Nikita Kucherov each had two goals and an assist as the Tampa Bay Lightning defeated the visiting Carolina Hurricanes 6-4 in Game 4 on Saturday to take a 3-1 lead in the second-round series.

The Lightning scored the final four goals in a game that had an extreme shift from earlier meetings in the series. The teams had a total of 11 goals in the first three games, including one matchup that went into overtime.

Game 5 is Tuesday night in Raleigh, N.C., where the Lightning won the first two games of the series.

Brayden Point and Tyler Johnson also scored for the Lightning, which cranked up production from its special teams. Ondrej Palat provided two assists, while Point had one assist.

Carolina goalie Petr Mrazek, in his second postseason appearance of the year, stopped 20 shots but was unable to repeat his Game 3 performance.

For a series that had some stellar defensive work, that suddenly changed. Through two periods Saturday, the teams combined for nine goals on 41 shots.

Carolina led 4-2 before the Lightning ended the second period with goals from Kucherov, Johnson and Stamkos across the final 5 1/2 minutes. The Stamkos goal came with 23 seconds to play before the second intermission.

Two of those goals came on Tampa Bay power plays. That gave the Lightning three power-play goals in the game, while the Hurricanes were 0-for-2 on power plays.

Earlier, Teravainen and Fast scored in a 39-second span and later in the second period, Hamilton and Slaving found the net in a stretch of slightly more than two minutes.

The teams racked up eight goals in the second period after a total of 12 goals, including Point’s goal, had been scored in the entire series prior to that.