Miami was in control in the first half, taking advantage of Toronto’s defensive struggles to create opportunities.

A minute after being denied by the quick foot of Toronto goalkeeper Quentin Westberg, Pizarro took a cross from Gonzalo Higuain and cut in for the finish inside the box to give Miami a 1-0 lead in the 15th minute.

Toronto had its first quality scoring chance of the half in the 23rd minute when Yeferson Soteldo’s free kick hit the crossbar and stayed out. Ifunanyachi Achara gave the visitors another chance in the 34th minute from in front but the kick went just wide of the net.

Robbie Robinson doubled Miami’s lead in the 35th minute, taking a long feed from central defender Leandro Gonzalez Pirez down the left flank before settling the ball for a quick strike from the corner of the goalmouth to make it 2-0.

Miami had 10 shots on goal in the first half, with five of those reaching the target. 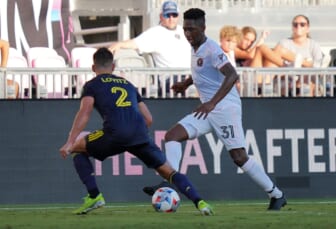 The home side wasted little time to pad their lead in the second half.

Pizarro put Miami ahead 3-0 with his second of the match in the 48th minute. Gonzalez Pirez found the midfielder streaking in past Toronto defender Luke Singh and Pizarro lifted it over Westberg.

The Reds got on the board on a fortunate bounce in the 62nd minute, when Soteldo’s free kick was headed in by Miami defender Kieran Gibbs to cut the lead to 3-1.