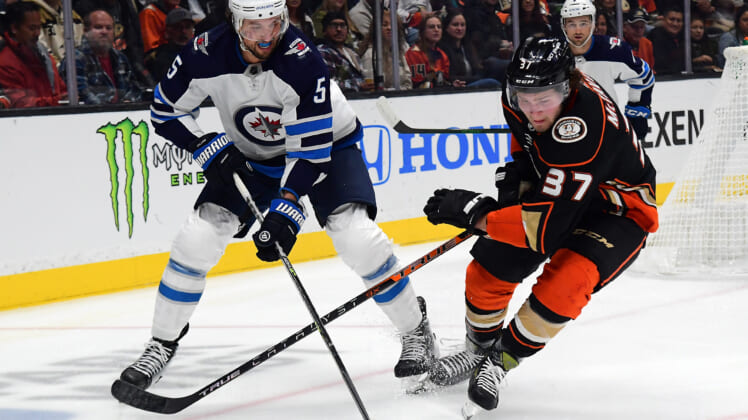 Mason McTavish had a goal and an assist in his NHL debut, while goalie John Gibson made 33 saves as the Anaheim Ducks finished off a 4-1 victory over the visiting Winnipeg Jets on Wednesday in the season-opening game for both teams.

Kevin Shattenkirk, Adam Henrique and Rickard Rakell added goals for the Ducks, whose positive start comes after a season when they had the second-lowest points total in the NHL at 43. The Ducks killed off all five Jets power plays.

Kyle Connor scored a goal for the Jets, whose season-opening challenge includes six of their first eight games away from home. Winnipeg goalie Connor Hellebuyck had 18 saves.

Shattenkirk gave the Ducks a 1-0 lead 6:11 into the season when he flipped a shot from along the right boards through traffic and past Hellebuyck.

McTavish, the No. 3 overall selection in this year’s draft, made it 2-0 at 13:20 of the opening period when he charged the net and scored off the rebound of a Hellebuyck save. McTavish was in the lineup after Max Jones was unavailable because of a non-COVID illness.

After Connor got the Jets within a goal at 2-1 just 3:48 into the second period, the Ducks regained their two-goal lead on their first power play of the season. McTavish kept a loose puck alive in the Jets’ zone and fed Cam Fowler, whose hard shot from the slot was redirected into the goal by Henrique. It was Henrique’s 400th career point.

Anaheim scored its second on the power play at 6:20 of the third period when Rakell netted a slight deflection of a Jamie Drysdale shot from the deep slot.

The Jets were playing without forward Mark Scheifele, who was serving the final game of a four-game suspension for a hit during last season’s playoffs.