Los Angeles Dodgers’ first baseman Freddie Freeman became very emotional talking to the media today about his first game back in Atlanta as an opposing player against the Braves.

On Friday, the Dodgers will begin a three-game series against the Braves at Truist Park in Atlanta. The matchup is notable as the first-place team in the National League West facing the defending MLB champions and the second-place squad in the NL East.

However, despite it being a series featuring two of the best teams in the league, it will be overshadowed by the storyline of Freeman, a Braves legend, returning to Atlanta for the first time since signing a six-year, $162 million deal with the Dodgers in March.

After winning the World Series in October 2021, it seemed like a lock that Freeman’s twelve-year tenure would continue. However, his representatives and the team could not agree on the length of a new contract for the 32-year-old. The schism opened up an opportunity that the Dodgers jumped on. 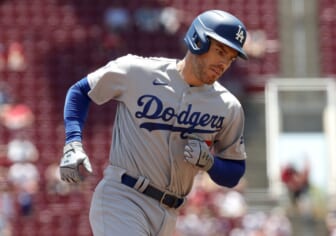 Nevertheless, there has never been a question about Freeman’s adoration for the organization that drafted him in the second round of the 2007 MLB draft out of high school. And it showed on Friday during Freeman’s press conference with the media.

MLB.com Dodgers reporter Juan Toribio noted that Freeman immediately started crying once he entered the interview room. After stepping away and then returning, he had difficulty staying composed for much of the conversation, which you can see below. After the media scrum ended, Toribio noted that the five-time All-Star “ended his presser by shaking hands and hugging the Braves media.”