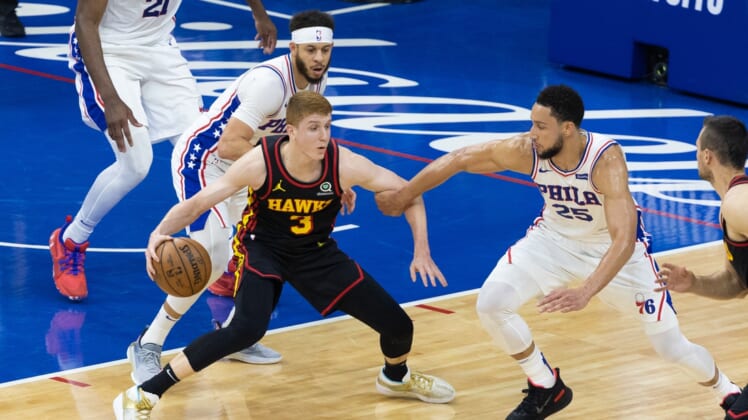 The Hawks will face the Milwaukee Bucks in the Eastern Conference Finals.

Young shot 5 of 23, but made a couple of clutch shots down the stretch.

John Collins had 14 points and 16 rebounds while Danilo Gallinari had 17 points and Clint Capela 13 for the Hawks, who reached the conference finals for the first time since 2015. The Hawks won three games at Philadelphia in this series.

The Sixers haven’t reached the conference finals since 2001.

The Hawks led 48-46 at halftime thanks in large part to Huerter’s 12 points. Young shot just 1 of 12 in the opening half.

Embiid had 15 points but committed four turnovers and appeared to tweak his injured right knee shortly before halftime.

The game was tight throughout the third as the Hawks moved out to a 64-63 advantage with 4:45 left after a tough jumper by Huerter. He was fouled as well but missed the free throw.

Matisse Thybulle scored four late points in the period, but the Hawks closed the third strong and led 76-71.

The Hawks missed their first nine shots of the fourth but only trailed 81-77. Gallinari then connected on a trey to close the Hawks within one.

Embiid responded with a jumper with 4:14 remaining to tie the game at 86.

Huerter was then fouled on a 3-pointer and dropped in all three for a 96-92 lead with 54 seconds left.