Devin Booker recorded 34 points, eight assists and seven rebounds to lead the Phoenix Suns to a 99-90 victory over the visiting Los Angeles Lakers in the opening game of the Western Conference first-round series on Sunday afternoon.

Deandre Ayton added 21 points on 10-of-11 shooting and collected 16 rebounds for the second-seeded Suns, who were playing in their first postseason game since 2010.

LeBron James had 18 points, 10 assists and seven rebounds for the seventh-seeded Lakers.

Game 2 of the best-of-seven series is Tuesday in Phoenix.

Dennis Schroder scored 14 points for Los Angeles. Anthony Davis had 13 on just 5-of-16 shooting and Andre Drummond and Montrezl Harrell added 12 apiece for the Lakers.

Los Angeles made 43.4 percent of its shots and were 7 of 26 from behind the arc. 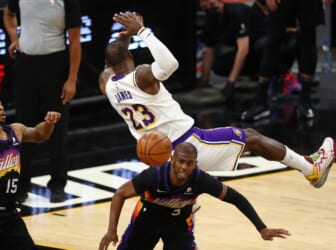 The Lakers trailed by 13 with 3:23 to play before Alex Caruso made a 3-pointer 18 seconds later. But there would be no frantic comeback bid as Davis and Caruso missed 3-pointers on the next two Los Angeles possessions before Phoenix’s Jae Crowder hit a short jumper with 1:35 left as the Suns closed it out.

The Suns led despite not attempting a single free throw while Los Angeles was 11 of 17 from the line.

Phoenix was leading 38-29 when Paul initially sustained his injury and left with 9:19 left in the half. He returned with 5:32 remaining and the Suns again leading by nine.

Phoenix increased its lead to 71-56 on a putback by Mikal Bridges with 6:04 left in the third quarter. Just 59 seconds later, Paul again left the court to have the shoulder worked on and the Lakers took advantage and cut their deficit to seven.

By the time Paul returned with 1:17 left, the Suns were leading by 13, and Booker added two free throws with 11.1 seconds to play as the Suns took an 81-68 advantage into the final stanza.

Booker’s 3-pointer gave Phoenix an 86-70 lead with 11:04 remaining before Los Angeles scored the next seven but the defending champions were unable to mount a full charge.