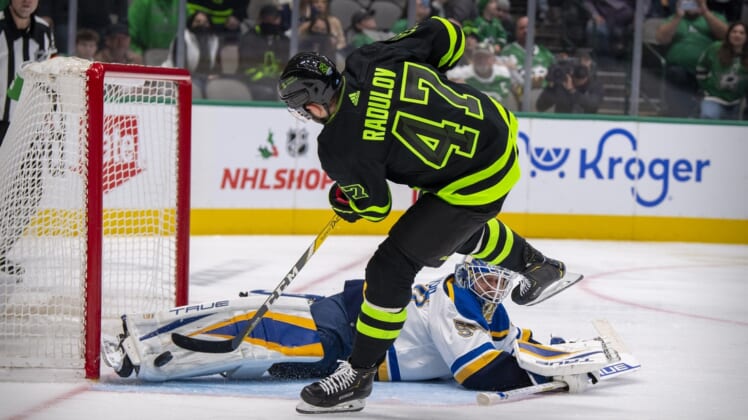 Roope Hintz scored a pair of short-handed goals to lead the host Dallas Stars to a 4-1 victory over the St. Louis Blues on Saturday.

After failing to score in the first 11 games of the season, Hintz has now lit the lamp five times in as many outings. The slick-skating forward became only the fourth player in franchise history to score two short-handed goals in the same game, and the first to complete that feat since the team moved from Minnesota to Dallas for the 1993-94 season.

Jamie Benn also scored twice for Dallas, which has won three of four games. Goaltender Jake Oettinger made 35 saves for his second win in as many starts this season.

Brandon Saad replied for the Blues, who have just one win in their last six outings. Goalie Jordan Binnington made 29 saves in the loss, including a few breakaway stops.

After a scoreless first period — and an unsuccessful penalty shot attempt by Dallas forward Alexander Radulov early in the middle frame — the hosts finally found took the lead with Benn’s power-play goal at 5:16 of the second period. Ryan Suter fired a long point shot that ricocheted off Benn’s outstretched arm and into the net.

Hintz’s first short-handed goal doubled the lead just past the game’s midway point. Michael Raffl led the way on a two-on-one rush before sending a cross-ice pass that Hintz converted.

Saad gave the Blues new life with a power-play goal of his own two minutes later. David Perron’s point shot was stopped, but Saad chipped home a rebound attempt to net his seventh goal of the season.

However, Hintz’s second short-handed tally of the game four minutes into the final frame — almost a carbon copy of his first, all the way to the cross-ice pass coming from Raffl — sealed the result.

Benn added an empty-net goal with 89 seconds remaining for his sixth goal of the campaign.