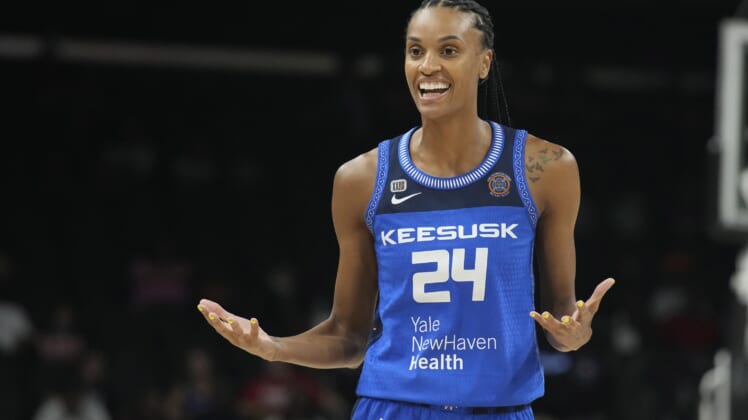 The Connecticut Sun became the second team to clinch a spot in the WNBA playoffs following a 76-62 win over the Las Vegas Aces.

The Sun break a tie and claim sole possession of the top seed in the WNBA standings improving to 18-6. This was their sixth straight win (not including their loss to the Seattle Storm in the Commissioner’s cup final) while also improving their home record to 10-1.

The Aces snapped a three-game win streak with the loss dropping their record to 17-7. As a result of their loss, the Sun sweep their three-game season series against the Aces giving them the tiebreaker if necessary for playoff seeding.

Chelsea Gray scored 15 points for the Aces while Liz Cambage and Dearica Hamby each scored 13 points. Reigning MVP A’ja Wilson had a nightmare game scoring just four points on a horrendous 1-of-15 shooting from the field.

The game was very competitive in the first half with both teams trading the lead back and forth. However, the Sun led for the majority of the half ending with them leading 40-32.

The Sun looked to put the game out of reach in the third quarter scoring six unanswered points to begin the third quarter. They would hold a double digit lead for much of the period until the Aces ended on a 7-1 run to go into the fourth down just four points.

After both teams went two minutes without a score to begin the fourth quarter, the Sun put together a 12-4 run building a 12-point lead effectively putting the game out of reach.

The Sun return to the court on Thursday when they play the Los Angeles Sparks, while the Aces will go up against the Atlanta Dream.