Robert Beric scored in the 32nd minute and the Chicago Fire stopped a 19-game road winless streak with a 1-0 victory over the New York Red Bulls on Saturday night in Harrison, N.J.

Chicago (6-11-5, 23 points) won a road game for the first time since beating Orlando City on Oct. 6, 2019. The Fire were 0-13-6 between road wins and avoided making dubious history as the first team in MLS history to record three separate road winless streaks of at least 20 games.

The Red Bulls (6-10-4, 22 points) played for the first time in 10 days after last Saturday’s match with New York City FC was postponed due to unplayable field conditions. New York fell to 1-5-3 in its past nine games and were blanked for the fifth time this year.

Chicago goalkeeper Bobby Shuttleworth made two saves for his fourth shutout of the season. He preserved the lead with a diving stop on Fabio in the 88th minute.

Beric helped the Fire beat the Red Bulls for the second time this month when he connected on his third goal of the season by finishing a throw-in.

Chicago’s Carlos Teran threw the ball in and the pass deflected off New York defenders Andrew Gutman’s head and Caden Clark’s leg. Beric quickly gained possession and fired a right-footed shot from close range into the back of the box. 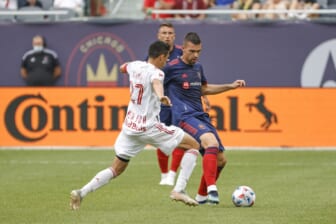 New York nearly tied it in the 50th minute when Clark was alone in the center of the box but his right-footed shot sailed wide. Nearly a minute later, Clark’s left-footed attempt sailed wide following a Red Bulls’ corner kick.

In the 66th minute, New York missed its best chance when Daniel Royer could not get his left foot on a pass from Fabio while standing wide-open at the left side of the box.

New York also missed scoring chances in the 82nd minute when Frankie Amaya’s header off Sean Davis’ free kick was blocked. Seconds later, Royer’s header off a feed from John Tolkin on a set piece sailed to the right of the net.