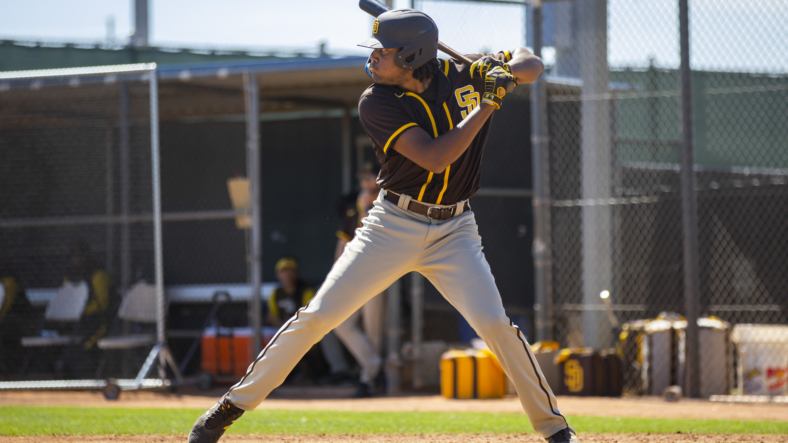 The Washington Nationals likely won’t have another player like Juan Soto for generations. However, the blockbuster trade that sent him to the San Diego Padres might have provided a gem with outfielder James Wood.

Drafted out of IMG Academy with the 62nd overall pick in the 2021 LB Draft, Wood quickly blossomed in the Padres’ farm system. Assigned to the Rookie complex league after being picked, the teenager posted a .372/.465/.535 slash line with 10 steals in 26 games. It quickly put him on the national radar as a fast-rising outfield prospect.

San Diego assigned the 19-year-old outfielder to the Lake Elsinore Storm in the Single-A California League to open the 2022 season. Despite being one of the younger outfielders at the level, Wood’s left-handed bat consistently made contact and he built upon his success from his debut a year prior.

The early success quickly pushed him into top-100 prospect lists, with some evaluators even higher on the 6-foot-7 outfielder. As the Padres and Nationals discussed the parameters of a Soto trade, Wood’s name quickly became a priority for general manager Mike Rizzo.

It’s certainly far too early to judge the Nationals’ return and history suggests that none of the players involved will ever become perennial All-Stars let alone a future Hall of Famer. But Wood is settling in quickly with his new team, even making a case for a promotion before the minor league season ends.

Keep in mind that there is a mental adjustment after being traded. This is the first time Wood is experiencing the realities of pro baseball. Not only that, he’s suddenly in a new environment, facing more pressure and learning from a new coaching staff he didn’t know a month ago. Despite all of that, his numbers are almost on par with his phenomenal stats at Lake Elsinore.

The early success is once again drawing the attention of evaluators. Wood is soaring up top prospect lists late in the year, recently making it into the top 50 of The Athletic’s prospect rankings by Jim Bowden. Of note, Bowden puts a 50-hit tool and a 70-power tool on Wood’s profile and he offered a comparison to one of the best hitters in baseball.

“An outfield behemoth, Wood is probably the most intriguing of all the prospects the Nationals acquired in the blockbuster Juan Soto trade. There were questions about his long levers and swing when the Padres drafted him in the second round in 2021, but he answered those loudly by slashing .331/.435/.544 in his first 351 pro at-bats. He also hit 15 home runs in that time. How special is Wood? Think Yordan Alvarez as an offensive comp at the same stage of his career.”

Comparing Wood to Yordan Alvarez is certainly noteworthy. One thing to keep in mind, Alvarez’s highest strikeout rate in the minor leagues was 25.9% across 139 plate appearances in A-ball. Wood (27.3%) is notably higher and it’s dangerously close to the 30% strikeout rate that is rarely seen from star players in the majors.

It’s certainly fair to say the Nationals should be excited about Wood. He boasts the physical tools and production that suggests he could become the best player in the package of prospects Washington received. If all goes well, we could see him make his MLB debut in 2025.