Golden State Warriors star Stephen Curry is already one of the highest-paid players in the NBA and a looming contract extension will put him at a historic level.

Fresh off an MVP-caliber season, Curry once again demonstrated why he is one of the best players in the NBA. Heading into his age-33 season, it seems Golden State is ready to bet on its future Hall of Famer cementing his legacy with stellar play for years to come.

According to NBA insider Marc Stein, Curry and the Warriors are moving towards a four-year contract extension worth $215 million.

A three-time NBA champion and two-time MVP, Curry last renegotiated his deal with the Warriors in 2017. He became one of the richest pro athletes at the time, agreeing to a five-year deal worth $201 million. Once the ink dried, he became the first NBA player to sign a supermax contract worth $200-plus million. 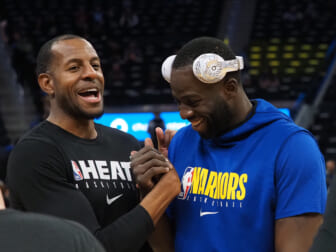 Considering the elite level Curry played at this past season, it comes as no surprise the Warriors are moving quickly towards another long-term deal. The best perimeter shooter in NBA history added to his legacy in 2021, setting a career-high in scoring and nearly leading Golden State to the No. 8 seed on his own.

With Klay Thompson returning this fall, Golden State will return to power as a championship contender. Curry will also put his name into the history books later this year, sitting 142 treys shy of breaking Ray Allen’s record for the most three-pointers made in NBA history.