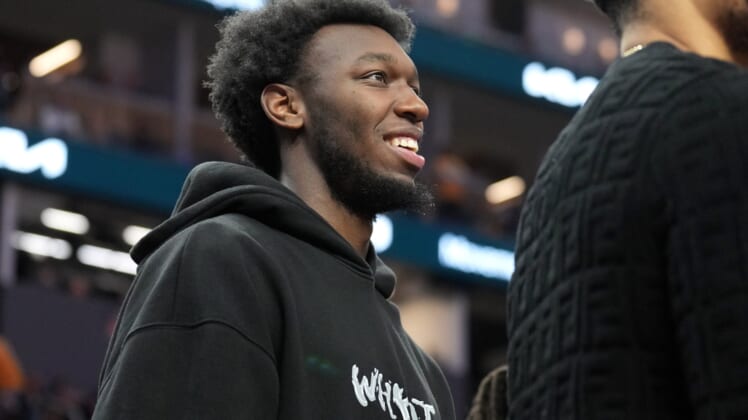 The Golden State Warriors are shutting down James Wiseman, putting an end to any hopes that the second-year center would play this season, the team said Friday.

Wiseman, 20, will continue rehabbing his right knee in the Bay Area. He tore his meniscus last April. The team said the decision was made after Wiseman experienced swelling in his right knee.

Golden State also said there are no plans for additional surgery.

“We’ve maintained throughout his entire rehabilitation process that we’re going to be patient and look out for James’ best interests in what we anticipate to be a long and successful career,” Warriors general manager Bob Myers said in a news release. “As a 20 year-old, his entire career is ahead of him. For us, as an organization, our focus is on James’ long-term health and we’re confident — and our doctors are confident — that this long-term approach will help James become the player we believe he will evolve into when he returns to the court.”

The Warriors have been deliberate in their action plan for Wiseman’s return. He participated in contact drills early last month, which led to playing in three G League games this month. However, swelling in the knee sidelined him. He averaged 17 points and 9.7 rebounds in those games.

Wiseman’s return was pushed back from training camp a couple of times, including a procedure to reduce swelling in November.

Wiseman was a rookie last season who averaged 11.5 points and 5.8 rebounds in 39 games (27 starts) before sustaining the tear. He underwent surgery to repair it.