Warriors even NBA Finals with smooth win vs. Celtics 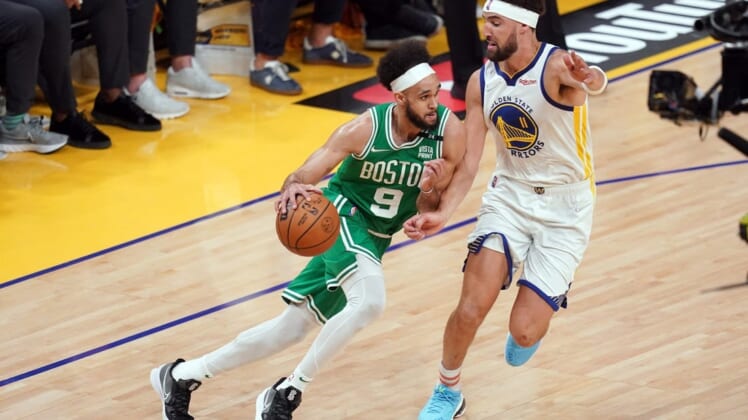 Stephen Curry scored 29 points and made five 3-pointers in three quarters of action and the Golden State Warriors evened the NBA Finals at one game apiece with a convincing 107-88 victory over the Boston Celtics on Sunday night in San Francisco.

Jordan Poole added 17 points and Kevon Looney tallied 12 for the Warriors. Klay Thompson and Andrew Wiggins had 11 apiece for Golden State, which travels to Boston for Game 3 on Wednesday.

Jayson Tatum made six 3-pointers while scoring 28 points for the Celtics, who won the first game of the series but were outscored 55-38 in the second half on Sunday.

Jaylen Brown added 17 points for Boston but was just 5-of-17 shooting. Derrick White scored 12 points off the Celtics’ bench.

Golden State shot 45.3 percent from the field, while Boston made 37.5 percent of its shots. Both teams were 15 of 37 from behind the arc.

Celtics Game 1 hero Al Horford (26 points) had just two points on 1-of-4 shooting in this one.

Curry scored 14 points in the third quarter to help the Warriors turn a 52-50 halftime lead into a 23-point cushion. Golden State outscored Boston 35-14 in the period.

Curry scored eight points during a 16-4 burst that saw Golden State open up a 68-56 lead with 6:47 left in the third quarter.

Grant Williams and Tatum hit consecutive 3-pointers to cut Boston’s deficit in half, but the Warriors responded with 11 straight points. Porter started the surge with a trey and Curry drained two straight from behind the arc to make it 79-62 with 2:13 remaining in the quarter.

Poole ended the quarter with two 3-pointers in the final 30 seconds. He launched the second from just inside the half-court line and it swished through just as time expired to give Golden State an 87-64 lead entering the final stanza.

The Warriors scored the first six points in the fourth quarter to increase the margin to 29 and cruised to the finish.

Curry scored 15 first-half points as the Warriors led by two at the break. Tatum made five 3-pointers while scoring 21 in the half for Boston, while Brown added 15.