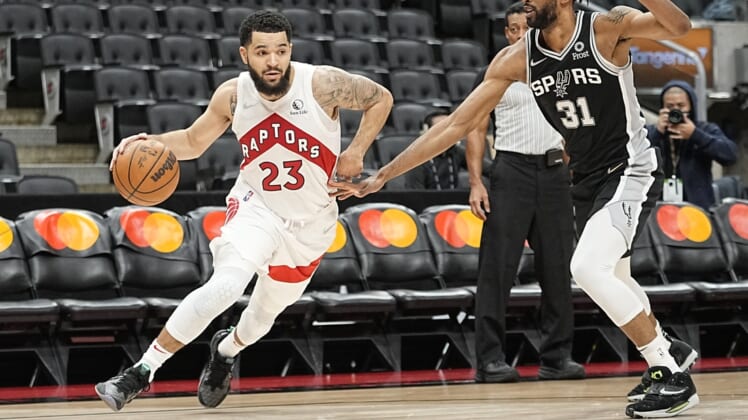 Fred VanVleet scored 24 of his 33 points in the first half and had seven assists as the Toronto Raptors defeated the visiting San Antonio Spurs 129-104 Tuesday night.

VanVleet, who was 7 of 14 in 3-point attempts, has scored more than 30 points in the past three games as the Raptors improved their record to .500 for the season at 17-17.

San Antonio has four games remaining on a seven-game road trip. Toronto finished a four-game homestand with a 3-1 record.

The Raptors, who had a 16-point advantage after three quarters, started the fourth quarter on a 9-3 surge to bump the margin to 22 points.

VanVleet’s 3-pointer gave Toronto a 17-point lead with 10:51 left in the third quarter. The Spurs cut the lead to 13, but the Raptors pulled ahead by 18 on Siakam’s dunk.

Jock Landale’s cutting layup with 3:22 remaining in the third quarter trimmed the lead to 10s. Toronto responded with a 9-0 run that was capped by Chris Boucher’s free throw. White finished the third-quarter scoring with a dunk and foul shot to cut the lead to 97-81.

The Spurs were without Devontae Cacok, Doug McDermott and Lonnie Walker because of health and safety protocols, and Dejounte Murray (return to competition reconditioning).

Toronto was without Yuta Watanabe and Svi Mykhailiuk because of COVID-19 protocols.