UFC Hall of Fame member Diego Sanchez is continuing to battle COVID-19, and he reported on social media that he now has pneumonia and blood clots in both legs.

He shared an update about his condition on Twitter early Friday, with a photo taken from his hospital bed.

“Pneumonia Covid never give up,” he wrote.

He also posted a photo of an X-ray to Instagram and said he had low oxygen numbers.

“This has been some tying times,” he wrote. 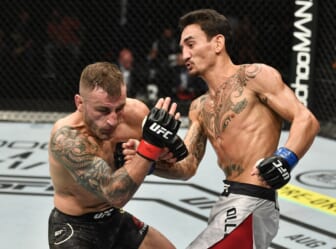 Sanchez posted to Twitter on Nov. 19 that he had received an infusion of antibodies but that he was feeling better. It isn’t clear when he tested positive for the virus. He said he is not vaccinated.

A 2019 UFC Hall of Fame inductee, Sanchez turns 40 next month. He has a career record of 31-13-0. He is one of only two fighters to have competed in four different weight classes.

Sanchez split from UFC in April after his former manager, Joshua Fabia, and the promotion had a disagreement about the fighter’s medical reports.