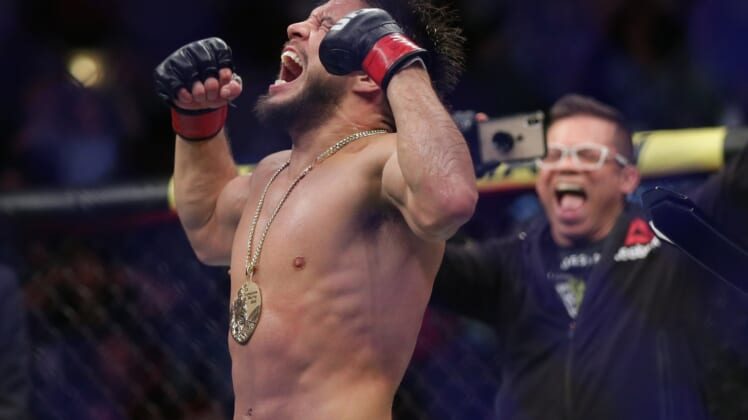 The penultimate fight before the main event at UFC 249. Henry Cejudo is putting his UFC bantamweight title on the line against Dominick Cruz. Fans can watch this fight, and the rest of the main card at UFC 249, on ESPN+ starting at 10 p.m. ET on Saturday, May 9. Here, we preview the bout, along with the latest odds and predictions.

To nobody’s surprise, the champ, Cejudo is favored to win this fight against Cruz.

Neither fighter has stepped into the Octagon in a while. Cejudo last fought last June when he claimed the bantamweight belt. Cruz hasn’t fought in more than three years.

Even though Cruz may be rusty after spending three years away from the sport, it’s worth noting he had won 13 straight before his last defeat.

Henry Cejudo: ‘The Messenger’ has become a lethal striker

Cejudo certainly sent a message the last time he fought. Outlasting Marlon Moraes, his endurance was evident in the third round. Before his TKO, Cejudo landed an incredible 72% of his strikes in that round. Once he got Moraes on the ground, “The Messenger” ended things with a barrage of strikes that incapacitated his opponent.

It was the third time in five fights that Cejudo won in TKO fashion. During his previous fight, Cejudo needed all of 32 seconds to put T.J. Dillashaw down.

For a guy who came into the UFC with a wrestling background, Cejudo has turned himself into a lethal striker. That’s going to be something to watch on Saturday during UFC 249.

Dominick Cruz: ‘The Dominator’ ready to reassert his dominance

Before injuries forced him to take an extended break from the UFC, Cruz was among the most feared fighters around. He won 13 straight heading into his UFC 207 match against Cody Garbrandt. “The Dominator” has lost just twice in 24 fights.

Even in defeat, Cruz looked fantastic against Dillashaw. He was quick, hard to hit, and the match was incredibly close from start to finish. So this isn’t the case of a beat-up old fighter coming back. Instead, Cruz is finally healthy again and eager to put his name right back at the top of the UFC’s list when it comes to bantamweight powerhouses.

Henry Cejudo vs. Dominick Cruz: Notable quotes ahead of UFC 249

As he looks to regain his UFC Bantamweight crown, Cruz hasn’t shied away from some trash talk. In fact, he’s already downplaying this fight against Cruz as less of a challenge than his victory over Dillashaw back in January, 2016.

“I think the win over T.J. would mean more because T.J Dillashaw is a true bantamweight, and Henry is still a [125-er,] so realistically this isn’t gonna be as tough of a fight as T.J., I know that,” Cruz said on the UFC 249 media conference call (via Sherdog.com).

For his part, Cejudo is eager to shut Cruz up in a big way. Responding to the notion that he may have “ring rust,” he took to Twitter with a taunt directed at Cruz.

“I thought about it with Dominick and Dominick is unpredictable. He’s too brittle,” Cejuco said, during an IG live with ESPN MMA (h/t Sherdog.com). I’m afraid to sign a contract with him cause I don’t know if he’s going to show up.”

This is the kind of trash talk we’re here for. It won’t be long until it’s put-up, shut-up time for both fighters.

It’s going to be fascinating to see how these two veteran fighters approach this coming bout.

Will they take an aggressive approach, looking to end each other swiftly with decisive strikes? They both have that ability, to be sure. Or, will they be looking to test one another’s conditioning, seeking a decision?

My heart wants a brawl. My brain tells me these vets will be a bit more tentative. If that does indeed become the theme, then I lean toward Cruz coming back from his three-year hiatus with a victory.