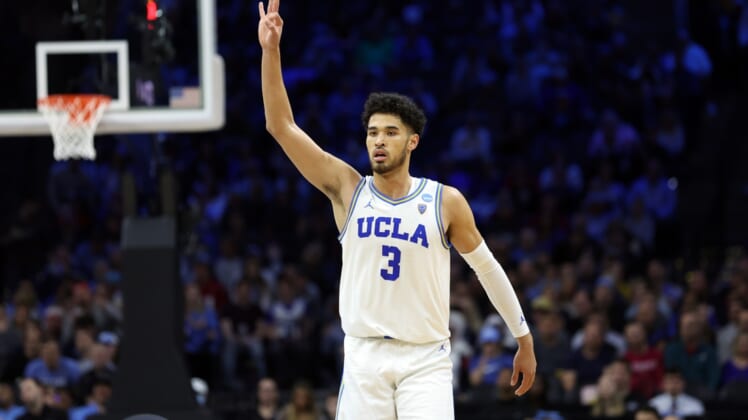 The 2021 NCAA Tournament star flirted with leaving for NBA last year before returning. He averaged a team-best 15.6 points this season.

“What a ride it’s been,” Juzang wrote on social media. “My couple years at UCLA were a couple years I’ll never forget. Last year’s run to the Final Four and this year’s electric season and atmosphere in Pauley Pavilion were so much fun to be a part of.

“Growing up in Los Angeles to them making Los Angeles proud is more than a kid could ask for. … I’ll forever be a Bruin and we’ll all remember the great moments we had.”

Our program is grateful for all the hard work, contributions & efforts from Johnny Juzang, who has announced on his Instagram account that he is declaring for the NBA Draft.

Juzang averaged 16.0 points during the 2020-21 season but raised his performance several levels during March Madness. He helped the Bruins win five consecutive games to go from the First Four to the Final Four before they fell 93-90 to Gonzaga on Jalen Suggs’ 35-foot miracle buzzer-beating shot.

Juzang scored 137 points — including 29 in the national semifinal vs. Gonzaga — in the team’s six tournament games, second only to Gail Goodrich (140 in 1965) in UCLA history.

This past March, the Bruins lost to eventual finalist North Carolina in the Sweet 16.

“Johnny has been tremendous for us during his two seasons in Westwood,” Bruins coach Mick Cronin said. “Johnny and his teammates helped us win seven NCAA Tournament games in two postseason trips, leading our program on a thrilling run to the Final Four in 2021.

“Along the way, he has been a great teammate and a joy to be around every day. We will miss him. We all wish Johnny nothing but the best as he pursues his professional career.”

Juzang scored 901 points and made 100 3-pointers in 57 games at UCLA. He was a second-team All-Pac-12 selection as a sophomore and a first-team choice this past season.

Juzang played his freshman season at Kentucky — he averaged 2.9 points in 28 games (two starts) — before transferring to UCLA.

Juzang is the third UCLA player to enter the draft, joining Jules Bernard and Peyton Watson. Forward Jaime Jaquez Jr. said earlier this week he is returning for his senior season.