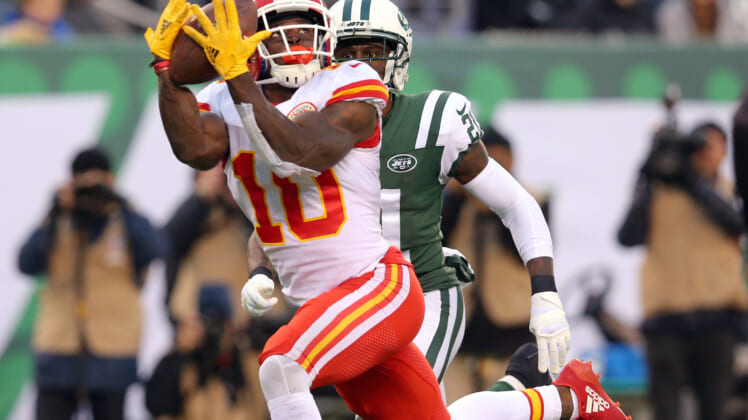 To many, the Tyreek Hill trade happened just about as fast as he can get behind the defense for a 75-yard touchdown. First, news broke that he had been given permission to seek a trade and before we knew it, word leaked that the superstar receiver was deciding between the New York Jets and Miami Dolphins, if he departed from the Kansas City Chiefs.

We know now that Hill picked the Dolphins, but as the six-time Pro Bowl WR tells it, there was never a chance that he was headed to the Big Apple to begin with.

Did the Kansas City Chiefs use the New York Jets for leverage in Tyreek Hill talks?

Since Tyreek Hill, as he noted, was always only interested in heading back home to Miami, the Kansas City Chiefs may have simply been using the New York Jets to help drive the trade price up. As it’s been reported, the Chiefs weren’t willing to pay Hill the contract terms he demanded, which was to become the new top earner among wide receivers, surpassing Davante Adams.

For the Chiefs, if they were to part with Hill, they wanted a similar package than what the Packers received for trading their No. 1 receiver, focused around a first and second-round pick. Once the Dolphins were willing to meet this price, the deal was essentially done. The Jets were no longer needed.

We may never know just how long this deal was in the works, or just how much the Chiefs went back and forth negotiating with the Jets, but it appears in the end, both Hill and Kansas City got what they wanted. And the Dolphins added a major piece to their offense.