Depression and the helpless feelings that come with it is one of those afflictions that seems to have been overlooked by mainstream American society. It’s a disorder that many don’t understand but a large amount of Americans have had at some point in their lives. Much like any other relatively unknown affliction, being open about it is one of the best ways to educate an unsuspecting audience.

This is exactly what young Arizona Cardinals defensive back Tyrann Mathieu has decided to do. It started when the previously troubled athlete changed his Twitter bio last month. 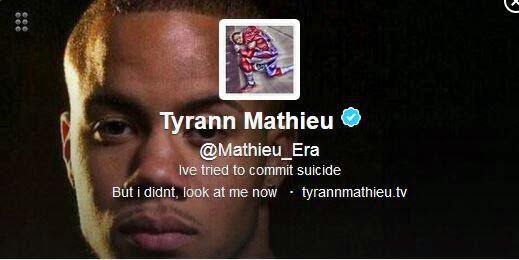 And it culminated in an interview with Fox Sports in which Honey Badger opened up about his suicidal thoughts.

I think the biggest thing is to be open about it,” he said Tuesday after the first day of Cardinals minicamp at the team’s practice complex. “Part of it is reaching out to others trying to help; part of it is self-counseling, talking about it, not shying away from it. Most people try to isolate themselves and pretend like things are all good when a lot of times, that’s not how it is.

According to the Fox Sports report, Mathieu’s deepest fall into the abyss of such dark thoughts came when he was jailed while at LSU for possession of marijuana.

I’m sitting in that jail cell thinking, ‘I don’t know if I want to go back out there and face the music,’ ” he said. “I didn’t know how I was going to commit suicide in the cell, but that was the direction my life was heading.

Mathieu eventually overcame his troubles, both from a mental and legal standpoint, and was selected in the third round of the 2013 NFL draft by the Arizona Cardinals. Former LSU teammate Patrick Peterson took Mathieu under his wing, and it seems that the young man has turned his life around off the field.

It is in this that Mathieu has decided to come out publicly and discuss the demons of his past. While not every person that suffers through depression has suicidal thoughts, the defensive back figured it couldn’t hurt to have some dialogue about this.

People go through a lot of things. They can be every-day personal things, not just suicide,” he said. “I just want to reach out and use this platform for something positive and be an inspiration to people who want to see me as an inspiration.

The first step is to make sure that those around you who might be depressed don’t feel alone. That they have some sort of platform or outlet to discuss the issues that they are facing. This is what Mathieu, through all the troubles that have plagued him, has decided to do in order to help others.

My utmost respect goes out to this young man for this. He can act as an inspiration to countless others who are currently going through the same thing. It’s the idea that no matter how difficult life might be at a certain point, there is always a better day ahead. Mathieu is a living example of this. And may he continue to shine, both on and off the field.