Victoria Azarenka of Belarus returns to Jessica Pegula of the United States during their quarterfinal match of the BNP Paribas Open, Wednesday, Oct. 13, 2021, in Indian Wells, Calif.

Victoria Azarenka is on the verge of becoming the winningest champion in the history of the WTA Tour’s Indian Wells, Calif., event.

The 27th-seeded Belarusian player advanced to the final of the BNP Paribas Open with a 3-6, 6-3, 7-5 win over 24th-seeded Jelena Ostapenko of Latvia on Friday.

Azarenka, who won the tournament in 2012 and 2016, will oppose either 12th-seeded Ons Jabeur of Tunisia or 21st-seeded Paula Badosa of Spain in the title match on Sunday.

Azarenka is one of nine WTA players who share the record of two Indian Wells championships since the event was established in 1989. She is part of an illustrious list that also includes Martina Navratilova, Mary Joe Fernandez, Steffi Graf, Lindsay Davenport, Serena Williams, Kim Clijsters, Daniela Hantuchova and Maria Sharapova. 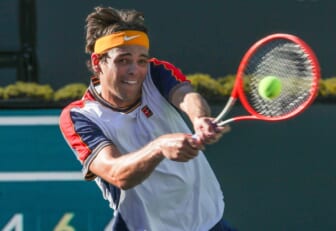 Neither Azarenka nor Ostapenko possessed a dominant serve Friday, as they combined for four aces and 14 double faults. Azarenka proved slightly more successful on break opportunities, converting five of her eight chances to Ostapenko’s 4 of 13 success rate.

Ostapenko, already up a set, held a 2-0 lead in the second set before Azarenka won the next five games. Azarenka broke serve in the opening game of the final set before Ostapenko pulled level at 3-3. A decisive service break gave Azarenka a 6-5 lead, and she saved three break points in the final game to seal the match.