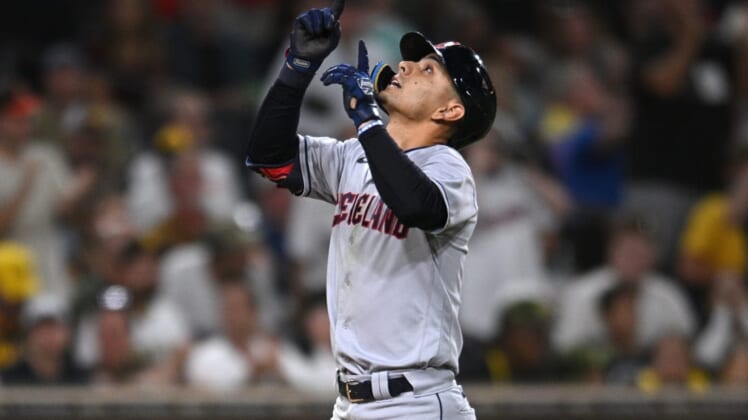 Mike Clevinger gave up two hits over six innings on Tuesday against his former Cleveland teammates, but both were solo homers, lifting the Guardians to a 3-1 win over the San Diego Padres.

Oscar Gonzalez and Andres Gimenez went deep and five Cleveland pitchers held San Diego to six hits and struck out 13 in the opener of a two-game interleague series.

Gonzalez gave the Indians a 1-0 lead with two outs in the second, driving the first pitch he saw from Clevinger into the left field seats for his fourth homer of the season.

Gimenez led off the fifth with his 15th homer, a drive that stayed just inside the right field foul pole.

The Padres halved the deficit in the bottom of the fifth. Austin Nola opened the inning with a double off Guardians starter Aaron Civale, moved to third on Jurickson Profar’s groundout to first and scored on Jake Cronenworth’s bloop, opposite-field single to left.

San Diego’s Trent Grisham struck out four times, twice for the final out of an inning with two on. The Padres went 1-for-10 with runners in scoring position.

With two outs in the eighth, the Guardians rallied for an insurance run. Steven Kwan drew a walk from Luis Garcia and moved to second on Amed Rosario’s swinging bunt single. Ramirez then greeted Garcia’s replacement, Tim Hill, with a RBI single to center.

Clevinger (4-5) walked one and struck out four.

Civale gave up the Padres’ only run on four hits and two walks with four strikeouts in 4 2/3 innings. Nick Sandlin (5-2) followed with 1 1/3 perfect innings to earn the win. Emmanuel Classe struck out two in a perfect ninth inning for his 29th save.

Cleveland posted its third victory in four games while San Diego fell for the fifth time in eight games.