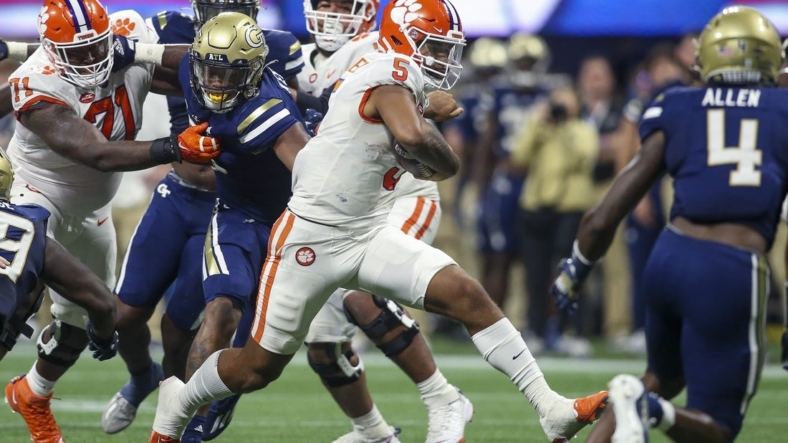 DJ Uiagalelei passed for one score and rushed for another to help No. 4 Clemson open the season with a 41-10 victory over Georgia Tech on Monday night in Atlantic Coast Conference play at Atlanta.

Will Shipley rushed for two touchdowns and Beaux Collins and Will Taylor each caught one as the Tigers defeated Georgia Tech for the eighth consecutive time. Uiagalelei completed 19 of 32 passes for 209 yards, while Carson Donnelly and Wade Woodaz each blocked a punt to set up Shipley’s touchdowns.

Jeff Sims was 23-of-36 passing for 164 yards with one touchdown and one interception for the Yellow Jackets. E.J. Jenkins caught a touchdown pass for Georgia Tech.

Andrew Mukuba had an interception for Clemson, which outgained the Yellow Jackets 386-237.

Georgia Tech was within 14-10 when Sims tossed a 13-yard touchdown pass to Jenkins with 9:47 remaining in the third quarter.

Potter added a 31-yard field to give the Tigers a 17-point lead with 8:45 remaining in the final frame.

A short time later, Woodaz blocked the punt of Georgia Tech’s David Shanahan and Clemson took over at the Yellow Jackets’ 15-yard line. Four plays later, Shipley scored from the 3 to make it 34-10 with 6:27 left.

Clemson held a 14-3 lead at halftime.

The Tigers’ offense sputtered early on but was set up with a short field after Donnelly blocked the punt of Shanahan. Brannon Spector recovered the ball and returned it 13 yards to the Yellow Jackets’ 5-yard line.

It took Clemson four runs to get into the end zone with Shipley scoring on fourth down from the 1 with 9:53 remaining in the half.

The Tigers increased their lead to 14-0 when Collins caught a 6-yard touchdown pass with 3:52 left in the half. Georgia Tech got the board on Jude Kelley’s 45-yard field goal with 1:15 to play.