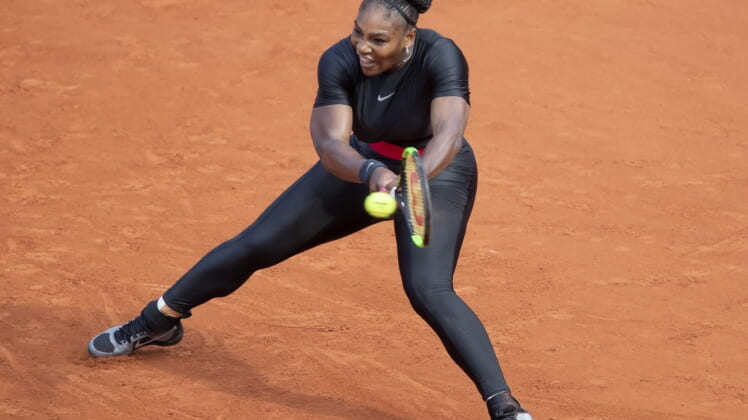 In her first Grand Slam match since giving birth to a baby, the legendary Serena Williams took out Kristyna Pliskova in the first round of the French Open on Tuesday.

For Williams, the win quieted skeptics after seeing her fall to No. 453 in the world following her pregnancy.

Not only that, Williams was out there styling at Roland-Garros.

Needless to say, Twitter had some pretty awesome reactions to what Serena was wearing during her Round 1 match in France. Here’s the best.

The catsuit is back and it’s having my queen looking like a superhero! ?? #slay @serenawilliams #FrenchOpen2018 #RolandGarros pic.twitter.com/PKYFNHMq5E

Serena Williams came to @rolandgarros dressed as a super hero and I am ALL ABOUT IT. pic.twitter.com/soSeKs3jb1

Following her return to grand slam tennis after having her baby girl, Serena Williams wears a full, skintight bodysuit & braids in her first match at the French Open. You can’t tell me she ain’t the GOAT #RG18 pic.twitter.com/YjJmEkcjz6

I am absolutely living for Serena Williams' bodysuit. The queen has returned.

Remember when Serena Williams tweeted this picture back in 2011? The catsuit is back! #RG18 pic.twitter.com/xKdJzDUnig

We see you, @serenawilliams.

? of a kind #SerenaWilliams pic.twitter.com/0lviARGAFJ

@serenawilliams How in the world this perfection ?‍♀️ pic.twitter.com/vKf6xpIh8v

For her part, Williams explained why she wore the suit after winning on Tuesday.

“All the moms out there that had a tough pregnancy and have to come back and try to be fierce, in a middle of everything,” she said, via Jon Wertheim of the Tennis Channel. “That’s what this represents. You can’t beat a cat suit, right?”

It’s been noted that Williams’ pregnancy was a tough one. She’s obviously out here to make a point. Good on her.